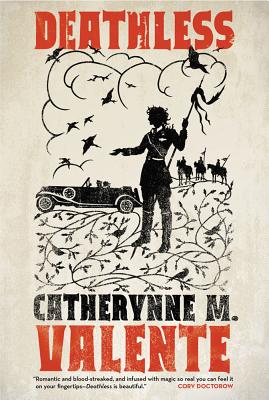 Koschei the Deathless is to Russian folklore what devils or wicked witches are to European culture: a menacing, evil figure; the villain of countless stories which have been passed on through story and text for generations. But Koschei has never before been seen through the eyes of Catherynne Valente, whose modernized and transformed take on the legend brings the action to modern times, spanning many of the great developments of Russian history in the twentieth century.

Deathless, however, is no dry, historical tome: it lights up like fire as the young Marya Morevna transforms from a clever child of the revolution, to Koschei’s beautiful bride, to his eventual undoing. Along the way there are Stalinist house elves, magical quests, secrecy and bureaucracy, and games of lust and power. All told, Deathless is a collision of magical history and actual history, of revolution and mythology, of love and death, which will bring Russian myth back to life in a stunning new incarnation.

CATHERYNNE M. VALENTE's first major release, The Orphan's Tales, was released in the fall of 2006 when Cat was twenty-seven. Volume I, "In the Night Garden," went on to win the James Tiptree Jr. Award and was nominated for the World Fantasy Award. The series as a whole won the Mythopoeic Award for adult literature in 2008. Her most recent novel, "Palimpsest," has been nominated for the Hugo Award and is a Locust Award finalist. She currently lives on a small island off the coast of Maine with her partner, two dogs, and one cat.

"Romantic and blood-streaked, and infused with magic so real you can feel it on your fingertips—Deathless is beautiful." —Cory Doctorow

“Stories, unlike people, don't stay dead forever, or not always. They can live again—but only under very special circumstances. They must be revived by the miraculous touch of a very rare class of being, a kind of multi-classed genius/scholar/saint, who can restore them to life. Catherynne Valente is such a being.” —Lev Grossman on Ventriloquism

“Valente just knocks me flat with her use of language: rich, cool, opiated language, language for stories of strange love and hallucinated cities of the mind.” —Warren Ellis on Palimpsest

“Valente’s lyrical prose and masterful storytelling brings to life a fabulous world, and solidifies Valente’s place at the forefront of imaginative storytelling.” —Library Journal, starred review, on The Orphan’s Tales

“Catherynne M. Valente’s first three novels earned her a reputation as a bold, skillful writer. Her latest, The Orphan’s Tales, reaffirms that early acclaim... These are fairy tales that bite and bleed. Every moment of lyricism is countered by one of clear-eyed honesty, and sometimes the moments combine...Now we wait for Valente to bend her knee again and make more myths.” —Washington Post

“The earlier novels and poetry collections have established her as a distinctive presence in contemporary fantasy’s landscape, but The Orphan’s Tales still might make her seem like a spontaneous mountain.” —Bookslut