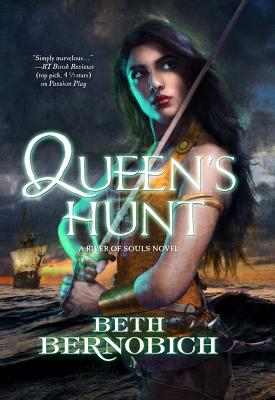 By Beth Bernobich
Unavailable to Order
Hard to Find

"Queen's Hunt" is the second title in Beth Bernobich's River of Souls novels, following her startling debut, "Passion Play." Filled with dark magic and sensual images, this is fantasy writing at its best.

Ilse Zhalina has left to start a new life in a garrisoned fort, leagues from her estranged lover, Raul Kosenmark. The violent quarrel that ended Ilse and Raul's relationship was quite public. And also, quite fake. They hope to mislead Kosenmark's enemies so that he can continue to influence the politics of the kingdom in an attempt to stave off an ill-advised war, while keeping Ilse safe from royal assassins who would kill anyone Raul is close to. Ilse longs for Raul, but is set on her own quest to find one of the three fabled jewels of Lir. One of the jewels is held by King Dzavek, sworn enemy of Veraene, who has used the jewel's power to live for centuries. Ilse seeks one of the other stones to counterbalance Dzavek's efforts to destroy her country.

In her search, she encounters a shipwrecked prisoner from another land, a woman who has a secret of her own...and the second jewel in her keeping. The two women become allies in their quest for the third jewel, because finding and controlling these stones could mean salvation for both of their nations. And their failure the ruin of their peoples.

BETH BERNOBICH's short fiction has been published in "Asimov's," "Interzone," "Postscripts," "Strange Horizons," and "Sex in the System." Two pieces appeared on the "Locus "Recommended Reading Lists for 2006 and 2008. "Queen's Hunt" is Bernobich's second novel in her River of Souls series. She lives with her husband and son in Connecticut.

“Readers will be impatient for a sequel.”  —Publishers Weekly

"Passion Play immediately plunges you into a deep world of past lives and magic...the layers are crafted so masterfully that you can't put the book down to climb out of the story."
—L. A. Banks, author of  The Vampire Huntress Legends series