Air and Darkness: A Novel (The Books of the Elements #4) (Hardcover) 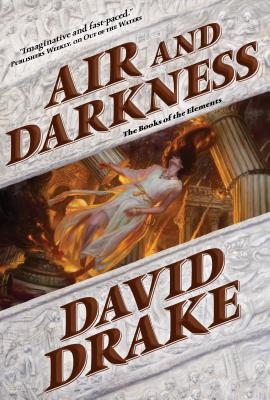 By David Drake
Unavailable to Order
Out of Print

Air and Darkness, an intriguing and fantastic adventure, is both an independent novel and the gripping conclusion of the Books of the Elements, a four-volume set of fantasies set in Carce, an analog of ancient Rome by David Drake.

Here the stakes are raised from the previous novels in an ultimate conflict between the forces of logic and reason and the forces of magic and the supernatural. During the extraordinary time in which this story is set, the supernatural is dominant. The story is an immensely complex journey of adventure through real and magical places.

Corylus, a soldier, emerges as one of the most compelling heroic figures in contemporary fantasy. Battling magicians, spirits, gods, and forces from supernatural realities, Corylus and his companions from the family of the nobleman Saxa-especially Saxa's impressive wife Hedia, and his friend (and Saxa's son) Varus-must face constant deadly and soul-destroying dangers, climaxing in a final battle not between good and evil but in defense of logic and reality.

David Drake (born 1945) sold his first story (a fantasy) at age 20. His undergraduate majors at the University of Iowa were history (with honors) and Latin (BA, 1967). He uses his training in both subjects extensively in his fiction.

David entered Duke Law School in 1967 and graduated five years later (JD, 1972). The delay was caused by his being drafted into the US Army. He served in 1970 as an enlisted interrogator with the 11th Armored Cavalry Regiment, the Blackhorse, in Viet Nam and Cambodia. He has used his legal and particularly his military experiences extensively in his fiction also.

David practiced law for eight years; drove a city bus for one year; and has been a full-time freelance writer since 1981, writing such novels as Out of the Waters and Monsters of the Earth. He reads and travels extensively.

“The whole tale strongly recalls that of Odysseus and other mythological travelers through underworlds, and fans of such stories will enjoy Drake’s take.” —Publishers Weekly