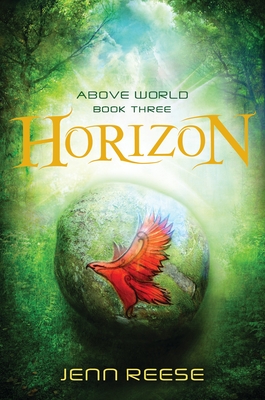 This is book number 3 in the Above World series.

In this third and final adventure in the Above World series, Aluna and her friends finally face their most terrifying enemy, Karl Strand.

Aluna and Hoku, Kampii from the City of Shifting Tides, and their friends, Equian Dash and winged Aviar Calli, are determined to stop a war. The maniacal ex-scientist Karl Strand is planning to conquer the world with his enormous army of tech-enhanced soldiers . . . unless the four friends can get to Strand first. Aluna’s plan is dangerous: pose as Upgraders and infiltrate the army. But the enemy isn’t what they expected and the strategy begins to crumble. When the friends are torn apart by conflicting allegiances, their slim chance of avoiding war seems to disappear completely. For Aluna and Hoku, what began as a quest to save their own people has become a mission to save the world. But do Aluna and her friends have any hope of defeating Strand if they can’t take him on together?

Jenn Reese writes science fiction and fantasy and has published short stories and two books for adults. She loves martial arts and has trained in kenpo, kung fu, and tai chi and is now studying weapons training. Jenn Reese lives in Los Angeles.

The Above World series is rare in that it actually improves with each sequel. ... Igniting most of the adventures are the various conflicts the friends face separately, even as their struggles are woven together throughout the novel. ... An entertaining novel that will provide a satisfying conclusion to the series for fans.
—VOYA

In Horizon, we come to the dramatic conclusion that delivers surprise, struggle, betrayal and conflict. Prepare for an edge-of-your-seat finale to the series that has dealt with real-life problems such as trust, prejudice, friendship and above all, being true to yourself.
—Justine Magazine