The Crazy Things Girls Do for Love (Hardcover) 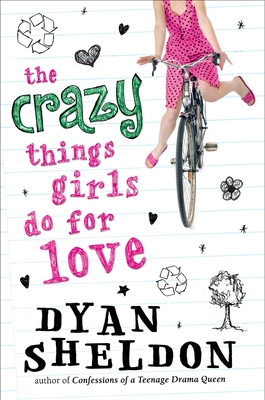 In a comedy from the best-selling author of Confessions of a Teenage Drama Queen, two popular girls vie to out-green each other to snare a boy.

Fashion-crazy Sicilee is a poster child for over-consumption. Her archrival, Maya, wears arty vintage clothes but hasn’t a clue what’s in the food she eats. So when drop-dead gorgeous new student Cody Lightfoot sets out to spread his eco-ways — and spur the Environmental Club toward an all-out Earth Day bash — Sicilee and Maya have their work cut out to attract his attention. What if Sicilee trades her fur boots for walking shoes (even if she can’t find the school when she’s not inside a car)? What if Maya dresses in plastic bottles and bags to preach in front of the supermarket (until security is called)? Or could it be that Cody isn’t all he’ s cracked up to be, and that saving the planet really is more important than impressing a boy? With her trademark quick-fire wit, Dyan Sheldon shows just what girls will do for love — and what earth — changing realizations they might have along the way.

Dyan Sheldon is the author of many novels for young adult readers, including the #1 New York Times bestseller Confessions of a Teenage Drama Queen, which was made into a major motion picture. American by birth, Dyan Sheldon lives in London.

Falling in love blends with saving the earth in Sheldon's latest novel, and both dramas are passionate, urgent, transforming, and hilarious.
—Booklist

Going green is initially more about romance than righteousness for high school rivals Sicilee and Maya, but their attempts to do so provide lots of laughs. Using drily funny third-person narration to expose various characters’ hypocrisies, Sheldon shows impeccable comic timing and a strong sense of irony…
—Publishers Weekly

The whole story is hilarious and totally relatable. Every girl has done something a little insane to attract the attention of a cute guy, but we love that Maya and Sicilee accidentally end up doing some good for the world in the process!
—Seventeen.com

Dyan Sheldon, who has made a name for herself with breezy, funny, smart fiction like CONFESSIONS OF A TEENAGE DRAMA QUEEN, is back in fine form with THE CRAZY THINGS GIRLS DO FOR LOVE. Her often snarky narration, which shifts back and forth among a handful of characters, cleverly showcases each character’s delusions, shortcomings and misperceptions...Fortunately, Sheldon manages to educate her characters, including interesting factoids about the planet that just might enlighten many readers as well.
—TeenReads.com