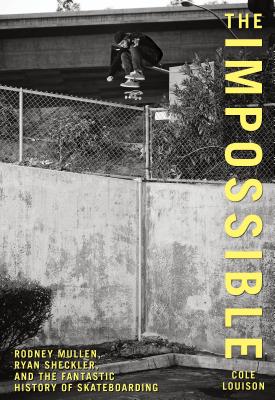 The Impossible aims to get skateboarding right. Journalist Cole Louison gets inside the history, culture, and major personalities of skating.

Cole Louison is a writer for GQ magazine and has contributed to Fader, McSweeney's, the New York Times, Buzzsaw and All Things Considered. While at Ithaca College's Park School of Communications, Louison majored in journalism and reported for the Ithacan and the Ithacan Journal. He also helped found one of the top alternative college publications: Buzzsaw Haircut. Upon graduation, Louison moved to Martha's Vineyard and began reporting for the Vineyard Gazette. While there, he became an island correspondent for WGBH Boston NPR and later moved to Cape Cod to work further for the station. After a year on the Cape, a Vermont art colony offered him a writing grant, moving him to Johnson, Vermont. The one-month residency turned into a job offer, and Louison spent a year in Vermont before selling his truck and moving to New York City in fall 2004. Once there he became an editor at McSweeney's Quarterly Journal, joined the New Yorker softball team, and temped for Vogue, Esquire, and Vanity Fair before coming to GQ, where he works today while continuing to write on a freelance basis. For GQ he has covered a variety of subjects and interviewed Bill Clinton, Reggie Miller, Dave Navarro, Big Boi, Mohammad Ali, Ted Nugent, Don King, David Remnick, the world authority on Samuel Beckett, Jim Jarmusch, and Jean-Claude Killy. His work has also appeared in the New York Times, Outside, and the Los Angeles Times.

"GQ researcher Cole Louison gave himself an impossible assignment: to write the complete history of a sport without it reading like a dusty encyclopedia or self-promotional wiki page. And make it interesting to an audience of people who don't really care about that sport (while not losing the millions of potential readers who do). Plus explain what an 'ollie' is.... [H]e's accomplished just that." —GQ

"Louison is both booster and critic, and writes with an eye to contradictions—skateboarding is a loner sport with a strong community, an outlaw pastime with big-money corporate backing—and gets to the heart of an often misunderstood pursuit." —The New Yorker

"Louison . . . has a light reportorial touch, a sense of the absurd and a sincere, affable persona…. [He] has turned his attention to the skateboarding world—a milieu that suffers no shortage of absurd, and absurdly talented, characters…. Through Louison’s eyes we see a once small subculture, now thoroughly colonized by mainstream media, public relations personnel, and other non-skate actors…. That Louison is able to successfully convey the excitement of skateboarding to the layman without offending the connoisseur is a testament to his well-researched grasp of a sometimes opaque subject." —McSweeney's Internet Tendency