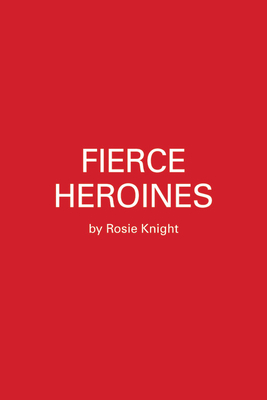 This inclusive and diverse anthology gathers seventy-five empowering heroines -- perfect for pop culture fans of all ages.
Whether it's anime, movies, video games, comics, books, or television series, pop culture is full of female characters that inspire and encourage us to be brave, kind, thoughtful, and powerful. With comic-book inspired illustrations, character profiles and origins, and fun facts throughout, Fierce Heroines is the ultimate feminist tribute to pop culture's most amazing female characters.

Now fans can learn about 75 diverse classic and contemporary heroines that are empowering girls and women all over the world like:
A perfect gift for girls, women, and fans of all kinds, Fierce Heroines is a powerful, inspirational reminder that anyone can be a heroine!

Rosie Knight is a journalist and author from London who currently lives in Long Beach, CA. She grew up reading comics, writing poetry, and talking far too much about her passions. Luckily, she managed to translate that into a career and now spends her time writing about all the things she loves at outlets like The Hollywood Reporter, Nerdist, IGN, Slashfilm, Eisner-nominated Women Write About Comics, Eisner-winning PanelXPanel, Esquire, and Buzzfeed.

Arielle Jovellanos is a NY based freelance illustrator, writer, and comic artist. Her work has been featured in the Eisner & Harvey nominated anthology Fresh Romance and in magazines, comics, books, and branded social media campaigns. Recently, she drew a series of variant covers for the Buffy The Vampire Slayer: Giles mini-series by Joss Whedon & Erika Alexander, was a featured cover artist for the Adventure Time comic series, and finished a nine month art residency with Redbubble in San Francisco.

With 75 entries (and brief tributes to additional characters at the end), readers are sure to find someone they haven't heard of before. A fun work with strong reader appeal.—Kirkus Reviews