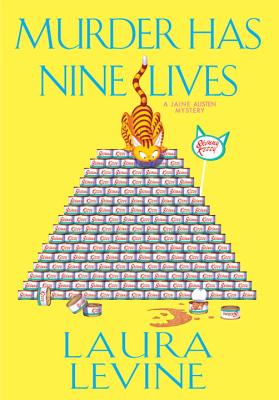 By Laura Levine
Unavailable to Order
Hard to Find

This is book number 14 in the A Jaine Austen Mystery series.

The future is looking bright for freelance writer Jaine Austen. She's signed up for a new job, she's looking forward to a tropical vacation, and her cat Prozac is slated to star in a major commercial. But when the claws come out behind the scenes, Jaine worries that murder might be the only thing to meow about. . .

A writer's life is far from glamorous. Still, Jaine's new gig to write an ad campaign for Toiletmasters' new line of self-flushing toilets comes with a few perks--including a date with the president's dreamy nephew. And with a much-needed trip to Maui on the horizon, it seems life couldn't get any better--until her cat Prozac is tapped to star in a Skinny Kitty commercial. But Jaine never would have guessed the world of cat food could be quite so catty. . .

Jaine is nervous that Prozac won't be able to take direction, but the finicky furball ditches her diva behavior for the camera, eating and napping on cue like a seasoned pro. But just as Jaine begins dreaming of fame and fortune, Skinny Kitty's inventor drops dead on the set. Everyone is a suspect--including Jaine. And she'll have to get her paws on the truth before the killer takes a swipe at another victim. . .

Death Of A Neighborhood Witch

"Levine's latest finds her at her witty and wacky best." --Kirkus Reviews

Death Of A Trophy Wife

"If you love a good mystery, this book is for you." --New York Journal of Books

This Pen For Hire

"Laura Levine's hilarious debut mystery, This Pen for Hire, is a laugh a page (or two or three) as well as a crafty puzzle. Sleuth Jaine Austen's amused take on life, love, sex and LA will delight readers. Sheer fun!"--Carolyn Hart

Laura Levine is a comedy writer whose television credits include The Bob Newhart Show, Laverne & Shirley, The Love Boat, The Jeffersons, Three's Company, and Mary Hartman, Mary Hartman. Her work has been published in The Washington Post and The Los Angeles Times. She lives in Los Angeles, and is currently working on the next Jaine Austen mystery. Readers can reach her at Jaineausten@aol.com, or her website: www.JaineAustenMysteries.com.