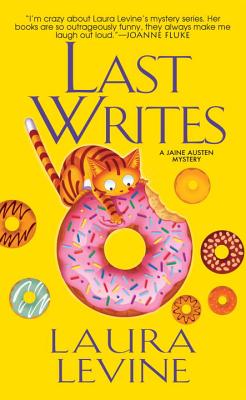 This is book number 2 in the A Jaine Austen Mystery series.

Wisecracking pen-for-hire Jaine Austen is back--and she's about to discover that working on the set of a Hollywood sitcom is no laughing matter. . .

Jaine still hasn't found a good man--or a way to keep all those sugary snacks from going straight to her hips. But--with a little help from her best friend Kandi--she's finally landed a gig as a sitcom writer! True, Muffy 'n Me (aka "Bewitched with Tits") isn't going to win any Emmys. And her office at Miracle Studios needs a little sprucing up, and a few dozen rat traps. But it sure beats writing boring brochures and bad resumes, so Jaine's not complaining. Until the plot thickens--with murder. . .

Jaine figures the trouble all started when Muffy 'n Me's hottest star, gorgeous Quinn Kirkland, seduced the head writer--whose husband also works on the show. But when Quinn's caught in bed with the barely-legal actress who plays his niece, things really heat up--and his many jealous girlfriends start to figure things out. . .

So when the no-good heartthrob drops dead after nibbling a poisoned doughnut, Jaine isn't terribly surprised. But who could have done it? A competitive co-star and a couple of scorned lovers top Jaine's list of suspects, but the police have zeroed in on her man-crazy pal Kandi. She fell hard for Quinn--and nearly fell apart when she learned of all his other women. Now Jaine has to figure out who finally stopped Quinn's cheatin' heart--before her best friend ends up behind bars. . .

Laura Levine is a comedy writer whose television credits include The Bob Newhart Show, Laverne & Shirley, The Love Boat, The Jeffersons, Three's Company, and Mary Hartman, Mary Martman. Her work has been published in The Washington Post and The Los Angeles Times. She lives in Los Angeles, and is currently working on the next Jaine Austen mystery. Readers can reach her at Jaineausten@aol.com, or her website: www.JaineAustenMysteries.com.