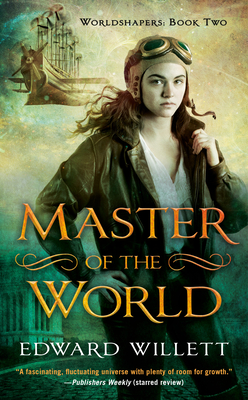 By Edward Willett
$7.99
On Our Shelves Now

This is book number 2 in the Worldshapers series.

Now in mass market, the second book in a gripping portal fantasy series by an Aurora Award-winning author, in which one woman's powers open the way to a labyrinth of new dimensions.

Shawna Keys has fled the world she only recently discovered she Shaped, narrowly escaping death at the hands of the Adversary who seized control of it...and losing her only guide, Karl Yatsar, in the process.

Now she finds herself alone in some other Shaper's world, where, in her first two hours, she's rescued from a disintegrating island by an improbable flying machine she recognizes from Jules Verne's Robur the Conqueror, then seized from it by raiders flying tiny personal helicopters, and finally taken to a submarine that bears a strong resemblance to Captain Nemo's Nautilus. Oh, and accused of being both a spy and a witch.

In the meantime, she has to navigate a world where two factions fanatically devoted to their respective leaders are locked in perpetual combat, figure out who the Shaper of the world is, find him or her, and obtain the secret knowledge of this world's Shaping. Then she has to somehow reconnect with Karl Yatsar, and escape to the next Shaped world in the Labyrinth...through a Portal she has no idea how to open.

Edward Willett is the award-winning author of more than sixty books of science fiction, fantasy, and nonfiction for readers of all ages. He won Canada’s Aurora Award for Best Long-Form Work in English for Marseguro (DAW), and a Saskatchewan Book Award for his young-adult fantasy Spirit Singer (Shadowpaw Press), and has been shortlisted for both awards many times. His podcast, The Worldshapers (www.theworldshapers.com), featuring conversations with other science fiction and fantasy authors, also won an Aurora Award for Best Fan Related Work. Born in New Mexico, Willett moved to Weyburn, Saskatchewan from Texas with his parents as a child, and began his career as a newspaper reporter for, and eventually editor of, the weekly Weyburn Review. An actor and singer as well as an author, he now lives in Regina with his wife, Margaret Anne Hodges, P.Eng. They have one daughter. www.edwardwillett.com

Praise for the Worldshaper series

“This novel sets up a fascinating, fluctuating universe with plenty of room for growth for the main characters, and readers will eagerly join their journey.” —Publishers Weekly (starred review)

“This series is for fans of any piece or part of geek culture. With the infinite possible worlds in the Labyrinth, every book should be a new, enjoyable adventure.” —Booklist

“It leaves the characters in places such that the next book promises to be very exciting from the get-go. Check it out if you like alternate world sci-fi/fantasy. It’s a fun, quick read.” —Game Vortex