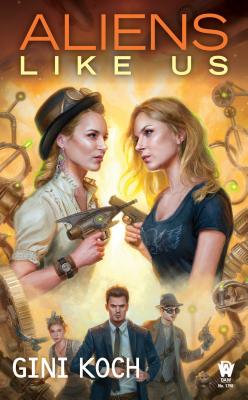 This is book number 17 in the Alien Novels series.

Katherine "Kitty" Katt faces off against aliens, conspiracies, and deadly secrets in the seventeenth novel in the Alien series, where sci-fi action meets steamy paranormal romance.

When a call for help from an unknown entity comes to Kitty, she figures it's just business as usual for her life. Only the call isn't from someone in her own universe but from one of the many others, where her life is even more different than the one she discovered in Bizarro World. And, this time, it's not just Kitty who changes universes.

Or, as the multiverse calls it: Game On.

"Koch's genius for taking the completely outlandish and making it seem perfectly plausible insures her loyal readers are in for yet another amazing roller-coaster ride. Great stuff!" —RT Reviews (top pick)

"Once again, Gini Koch has surpassed my expectations. There's a reason why this series is so popular and it's because there's nothing else out there in the universe like it." —Under the Covers Book Blog

"Koch returns to the ongoing saga of Katherine "Kitty" Katt-Martini with her 14th adventure, and it's packed full of the fast-paced chaos her fans thrive on.... another fun, fantastic story from Gini Koch." —B&N Sci-Fi & Fantasy Blog

"Alien Nation is a fantastic, thrill-a-minute ride that finishes one huge story arc to its action packed conclusion, and opens Kitty up for an even more interesting adventure in the next installments." —Gizmo's Reviews

"If you love a complex and ever growing tale with outlandish, funny characters and the action to back them up, then Alien Nation is the book for you." —Tome Tender