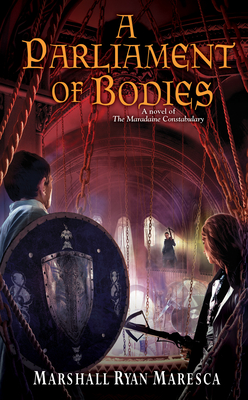 This is book number 3 in the Maradaine Constabulary series.

Mixing high fantasy and mystery, the third book in the Maradaine Constabulary series follows Inspectors Satrine Rainey and Minox Welling as they track down a dangerous murderer.

The city of Maradaine is vexed by the Gearbox Murders: a series of gruesome deaths orchestrated by a twisted mechanical genius. With no motive and no pattern, Inspectors Satrine Rainey and Minox Welling--the retired spy and untrained mage--are at a loss to find a meaningful lead in the case. At least, until the killer makes his most audacious exhibit yet: over a dozen victims in a clockwork deathtrap on the floor of the Druth Parliament.

The crime scene is a madhouse, and political forces conspire to grind their investigation to a halt. The King's Marshals claim jurisdiction of the case, corruption in the Constabulary thwarts their efforts, and a special Inquest threatens to end Minox's career completely. Their only ally is Dayne Heldrin, a provisional member of the Tarian Order, elite warriors trained in the art of protection. But Dayne's connection to the Gearbox Murders casts suspicion on his motives, as he might be obsessed with a phantom figure he believes is responsible.

While Satrine and Minox struggle to stop the Gearbox from claiming even more victims, the grinding gears of injustice might keep them from ever solving these murders, and threaten to dismantle their partnership forever.

Marshall Ryan Maresca's work has appeared in Norton Anthology of Hint Fiction and Rick Klaw's anthology Rayguns Over Texas. His novels The Thorn of Dentonhill, A Murder of Mages, The Holver Alley Crew, and The Way of the Shield each begin their own fantasy series, all set in the port city of Maradaine.

"Another exceptional book from MRM and adds yet another layer of vibrancy and depth to the ever expanding city of Maradaine. The Holver Alley Crew will appeal to fans of Scott Lynch or Leigh Bardugo’s Six of Crows." ―Powder & Page

"Not many books make me want to jump inside the pages and live among the characters. The Holver Alley Crew was an addicting read." —Night Owl Reviews (top pick)