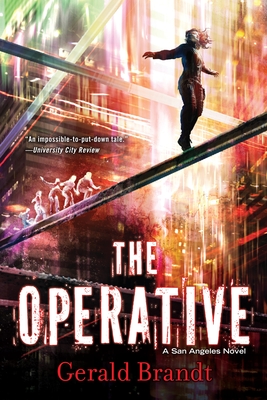 This is book number 2 in the San Angeles series.

Kris Merrill was a survivor. She’d lost her parents as a young girl, and she’d been forced to flee the dubious shelter of her aunt’s home at thirteen to escape the unwanted attentions of her uncle. She’d lived on the streets of San Angeles, finding refuge in the lowest level of the city. When she got the chance, Kris found a room to rent on Level 2, earning a precarious living as a motorcycle messenger, a courier delivering sensitive materials the megacorporations would not trust to any method that could be hacked.

A year ago, Kris’s life changed irrevocably when a delivery went terribly wrong, and she was targeted for termination by the Meridian corporation, one of the most powerful of the megaconglomerates that controlled the government. Salvation came in the form of Ian Miller, who rescued Kris from certain death, recruiting her for the underground resistance group of which he was a part.

Since then, Kris has been hidden with the resistance, training to become an operative. Just as her training with the anti-corporate movement is nearing its end, their compound is destroyed by surprise attack.

Ready or not, Kris and the other trainees are recalled to the dangerous metropolis of San Angeles. But their transport is shot down and Ian Miller, the man she loves, is captured. Someone, it seems, is using him to get to Kris.

With the help of a retired operative with PTSD, and the mysterious man who fled the scene when Kris’s parents were killed, Kris searches for any sign of Ian. As the corporations battle civil unrest—and each other—the city slowly shuts down. Kris and San Angeles are running out of time....

"The Courier is as lean and mean as Kris’s rugged ride, ripping through plot and world-building at a relentless pace... Brandt has created a darkly gripping vision of the future." ―B&N Sci-Fi & Fantasy Blog

“Brandt has created a fully-fleshed universe, filled with high tension, memorable villains, and plot twists by the dozen.” ―Barnes & Noble