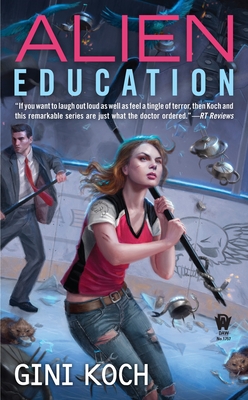 This is book number 15 in the Alien Novels series.

It’s a typical day of bureaucracy and stress for President and First Lady Jeff and Kitty Katt-Martini, in part because Kitty’s been tapped to represent Earth in the Galactic Council. Kitty feels that’s a bad idea, and she might be right.

When her first official TV morning show goes awry, it’s only the quick thinking of the actor determined to make the “Code Name: First Lady” movie a reality that saves the day. It also forces Kitty to work with Hollywood.

Meanwhile, the Embassy Daycare kids are all about to enter “real school”—and none of them want to go. They may have grounds to be concerned because many of the other students and their familes seem shady, and everyone seems to have an evil agenda.

Dealing with the assimilation of the aliens who have come to Earth, while fending off advances from a variety of Hollywood types, seems like Kitty’s biggest challenge. But then she and Jeff discover that Stephanie Valentino—Jeff’s niece and the true Heir Apparent to the original Mastermind—is back.

Can Jeff and Kitty thwart the most insidious attacks yet, while keeping tenuous peace on Earth and goodwill toward all sentient species going? And can they also find time to be part of the most truly terrifying organization they’ve ever encountered—the school’s parent-teacher association?