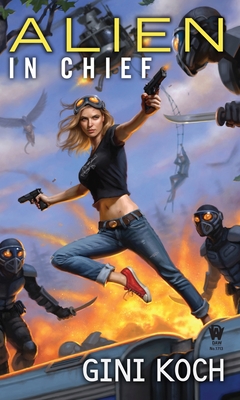 This is book number 12 in the Alien Novels series.

As Kitty can tell you, it’s not easy being the wife of the vice president—especially not when he’s an alien from the Alpha Centauri system. But she and her A-C husband, Jeff, have learned how to roll with whatever life and the bad guys throw at them—they think.

When the Alpha Centauri Planetary Council requests a visit with the president and vice president, things look politically dicey. When the most dangerous prisoners in the most secure supermax prison escape with ease, things look bad. But when the Mastermind releases a virus that kills people in a week, things go to Defcon Worse fast.

Now it’s up to Kitty to save everyone important in the U.S. government—including her mother, her husband, and herself—before the virus spreads through the rest of the country, and then the world. Plus she’s facing invisible attackers, crazed assassins, a teenager in hiding, the most dangerous train ride ever, the disappearance of her beloved flyboys, and a mysterious alien who could be an enemy or the ally she needs.

And this time, the Mastermind’s made it very personal. Either he’s going down...or Kitty is.