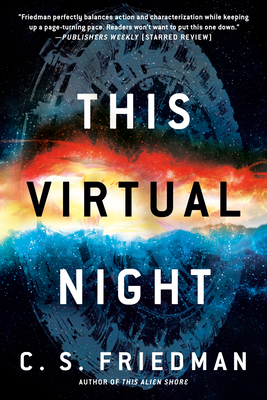 This is book number 2 in the The Outworlds series series.

Now in paperback, returning to the universe of New York Times Notable book This Alien Shore comes a new space opera from an acknowledged master of science fiction.

When deep-space travel altered the genes of the first interstellar colonists, Earth abandoned them. But some of the colonies survived, and a new civilization of mental and physical “Variants” has been established, centered around clusters of space stations known as the outworlds.

Now the unthinkable has happened: a suicide assault has destroyed the life support system of a major waystation. All that is known about the young men responsible is that in their last living moments they were receiving messages from an uninhabited sector of space, and were playing a virtual reality game.

Two unlikely allies have joined forces to investigate the incident: Ru Gaya, a mercenary explorer with a taste for high risk ventures, and game designer Micah Bello, who must find the parties responsible for the attack in order to clear his name. From the corridors of a derelict station lost to madness to an outlaw stronghold in the depths of uncharted space, the two now follow the trail of an enemy who can twist human minds to his purpose, and whose plans could bring about the collapse of outworld civilization.

An acknowledged master of dark fantasy and science fiction alike, C.S. Friedman is a John W. Campbell award finalist, and the author of the highly acclaimed Coldfire trilogy, New York Times Notable Book of the Year This Alien Shore, In Conquest Born, The Madness Season, The Wilding, The Magister Trilogy, and the Dreamwalker series. Friedman worked for twenty years as a professional costume designer, but retired from that career in 1996 to focus on her writing. She lives in Virginia, and can be contacted via her website, www.csfriedman.com.

Praise for This Virtual Night

"Friedman perfectly balances action and characterization while keeping up a page-turning pace. Readers won’t want to put this one down." —Publishers Weekly (starred review)

"Master of science fiction Friedman will satisfy your cravings for all things space-opera in this second Alien Shores novel, packed with action and imagined worlds and filled to the brim with sparkling detail." —Newsweek

"The novel is a fun romp and a fast read. Virtual reality, hackers, a diversity of alien races that are offshoots of mankind, politicking, intrigue; that's C. S. Friedman's latest in a nutshell." —Pat's Fantasy Hotlist

Praise for This Alien Shore

"C. S. Friedman borrows some big ideas from writers like Cordwainer Smith, Frank Herbert, and Samuel R. Delaney, and runs with them. Instead of stumbling under the burden, she succeeds in making the material her own." —The New York Times

"Friedman keeps her tale moving at a vigorous pace that's boosted through an abundance of well-chosen details.... It is likely to hold readers' interest tenaciously." —Publishers Weekly

"Once again Ms. Friedman offers us great richness in both concept and detail, ingeniously weaving together two strong plotlines and piquant characters into a superior reading experience." —Romantic Times

"A wide-ranging, action-packed space opera. This Alien Shore is guaranteed to entertain those who like to be swept up in an adventure with lots of characters, dangers, and revelations." —Science Fiction Chronicle

"In many ways, C.S. Friedman's work reminds me of William Gibson's—unique settings, complex and fascinating (though not necessarily likeable) characters, cool ideas and technology, a smart and savvy style." —Fantasy Literature

"There is so much of interest here and rather than spend paragraph after paragraph describing it all, which I could easily do, I will simply tell you to read it. It is a great book and well worth your time." —Worlds Without End