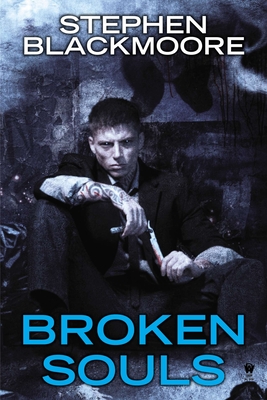 This is book number 2 in the Eric Carter series.

Sister murdered, best friend dead, married to the patron saint of death, Santa Muerte. Necromancer Eric Carter's return to Los Angeles hasn't gone well, and it's about to get even worse.

His link to the Aztec death goddess is changing his powers, changing him, and he's not sure how far it will go. He's starting to question his own sanity, wonder if he's losing his mind. No mean feat for a guy who talks to the dead on a regular basis.

While searching for a way to break Santa Muerte's hold over him, Carter finds himself the target of a psychopath who can steal anyone's form, powers, and memories. Identity theft is one thing, but this guy does it by killing his victims and wearing their skins like a suit. He can be anyone. He can be anywhere.

Now Carter has to change the game -- go from hunted to hunter. All he has for help is a Skid Row bruja and a ghost who's either his dead friend Alex or the manifestation of Carter's own guilt-fueled psychotic break.

Everything is trying to kill him. Nothing is as it seems. If all his plans go perfectly, he might survive the week.

Stephen Blackmoore is an author and a blogger. His first novel is City of the Lost, a paranormal noir with zombies, demons, witches, and a lot of action. He can be found at stephenblackmoore.com and on Twitter @sblackmoore.

"Blackmoore employs Chandleresque prose to smoothly incorporate a hard-boiled sense of urban despair into a paranormal plot, with occasional leavening provided by smart-aleck humor. Urban fantasy readers will appreciate the polished, assured writing and hope for a bevy of sequels." —Publishers Weekly

"Gritty, emotional and phenomenally imaginative, Blackmoore’s sophomore book is a pitch-perfect success.... Snappy, sarcastic yet heartwrenching style that defines the best noir narratives.... With wonderfully inventive paranormal elements, readers are sure to get lost in Eric’s journey and enjoy every moment of the ride, emerging at the end hungry for more." —RT Reviews (top pick!)

"Stephen Blackmoore’s Dead Things is a demon punch to the face. It will make you sit up and notice. Or fall down spitting out broken molars. Don’t mind the bloody drool, either way you’ll be smiling." —Pulp 300