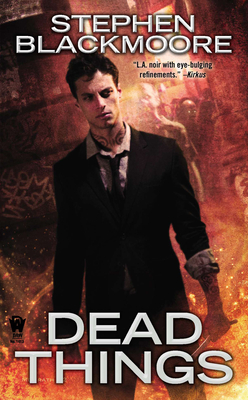 This is book number 1 in the Eric Carter series.

Stephen Blackmoore's sophmore effort, Dead Things, exists
in that exciting place where urban fantasy and noir meet for a late-night tryst. After spending fifteen years in
exile as necromancer for hire, Eric Carter's not great at dealing with the
living. Back in LA to find out who's behind his sister's brutal murder, Carter
is thrown back into a world that has moved on without him, and depending on
friends who he can't seem to trust. As Carter unravels the big ugly sweater
that his life has become, he discovers some things don't stay dead, some
friends don't stay honest, and some unsavory alliances can be convenient, even
if there's hell to pay later. Blackmoore has a talent for setting scenes that
pack visual punch, and I found myself loving the smartass, gallows humor of Dead
Things, and enjoying the clever, tiny ways magic and reality intertwine. I
flew through this book eager to see what would happen next. Stephen Blackmoore
is definitely someone to watch out for, and with Dead Things, I predict
Good Things in his future. – Jaclyn

Necromancer is such an ugly word, but it's a title Eric Carter is stuck with.

He sees ghosts, talks to the dead. He's turned it into a lucrative career putting troublesome spirits to rest, sometimes taking on even more dangerous things. For a fee, of course.

When he left LA fifteen years ago, he thought he'd never go back. Too many bad memories. Too many people trying to kill him.

But now his sister's been brutally murdered and Carter wants to find out why.

Was it the gangster looking to settle a score? The ghost of a mage he killed the night he left town? Maybe it's the patron saint of violent death herself, Santa Muerte, who's taken an unusually keen interest in him.

Carter's going to find out who did it, and he's going to make them pay.

As long as they don't kill him first.

Stephen Blackmoore is an author and a blogger. His first novel is City of the Lost, a paranormal noir with zombies, demons, witches, and a lot of action. He can be found at stephenblackmoore.com and on Twitter @sblackmoore.

"Blackmoore employs Chandleresque prose to smoothly incorporate a hard-boiled sense of urban despair into a paranormal plot, with occasional leavening provided by smart-aleck humor. Urban fantasy readers will appreciate the polished, assured writing and hope for a bevy of sequels." —Publishers Weekly

"Gritty, emotional and phenomenally imaginative, Blackmoore’s sophomore book is a pitch-perfect success.... Snappy, sarcastic yet heartwrenching style that defines the best noir narratives.... With wonderfully inventive paranormal elements, readers are sure to get lost in Eric’s journey and enjoy every moment of the ride, emerging at the end hungry for more." —RT Reviews (top pick!)

"Stephen Blackmoore’s Dead Things is a demon punch to the face. It will make you sit up and notice. Or fall down spitting out broken molars. Don’t mind the bloody drool, either way you’ll be smiling." —Pulp 300