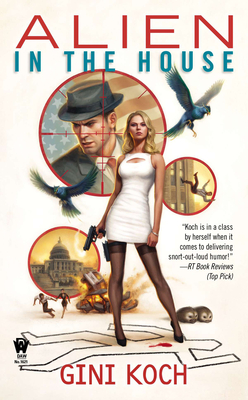 This is book number 7 in the Alien Novels series.

Jeff and Kitty Katt-Martini have learned the ins and outs of Washington politics, not to mention how to prevail in intergalactic war and foil dangerous plots. So when the newly elected Representative from New Mexico’s 2nd Congressional District dies under mysterious circumstances while at the Centaurion Embassy, it’s up to Kitty and the rest of the Diplomatic Corps to stop the killer, before the rest of the U.S. House of Representatives become casualties, particularly the replacement Representative for New Mexico’s 2nd District—Jeff Martini.

Alien in the House is the thrilling seventh installment of the Alien series.