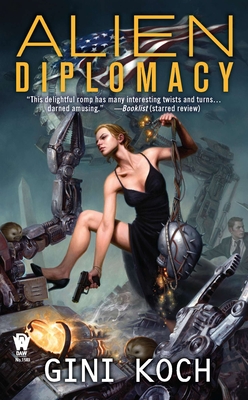 This is book number 5 in the Alien Novels series.

Being newlyweds and new parents is challenging enough. But nothing's ever easy for Jeff and Kitty-Katt Martini, particularly not when they have to switch from being super-being exterminators and Commanders in Centaurion Division to mastering the political landscape as the new heads of American Centaurion's Diplomatic Corps.

Kitty's brand of diplomacy and lobbying isn't quite as smooth as Jeff's—but when a shadowy assassination plot and a new set of anti-alien conspirators are identified, Kitty's the diplomat for the job—in between "Mommy and Me," "Diplomacy for Beginners," and the dreaded "Washington Wife" classes. Armed with only their wits, and dressed to kill, it's up to Kitty and the Diplomatic Corps to stop the bad guys from unleashing mayhem on all the world's leaders.

But will Kitty trust the right people, at the right times, or will going her own way prove deadly—not just to her, but to her daughter, Jamie?

Alien Diplomacy is the fifth installment of the thrilling Alien novels.