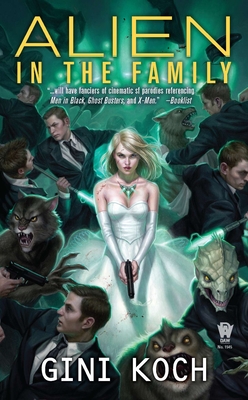 This is book number 3 in the Alien Novels series.

Planning any wedding is hard enough, but Katherine "Kitty" Katt and Jeff Martini have a lot more to worry about than seating arrangements, because multiple inter-stellar invasions, Alpha Team in mortal peril, and inter-alien conspiracies are all on the guest list—and the gifts they've brought contain some explosive surprises.

The discovery that Martini is actually a member of the Alpha Centaurion Royal Family brings additional bad news—emissaries are on their way to see if Kitty's royal bride material. And they're not the only things coming from the Alpha Centauri system. Amazonian assassins, spies, alien beasties, shape-shifters, and representatives from the Planetary Council, combined with a tabloid reporter who's a little too on the mark, create a deadly situation for Kitty and the rest of Alpha Team.

When the assassins strike far too close to home for anyone's comfort, Kitty realizes it's going to come down to more than throwing a bouquet—she's going to have to face an entire planetary consciousness and dethrone a monarch in order to make it to the church on time...

Alien in the Family is the thrilling third installment of the Alien novels.