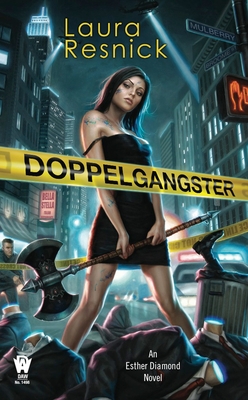 "In Laura Resnick's Doppelgangster, the New York actress is 'resting' between roles by working as a singing waitress at a Manhattan mob restaurant because wiseguys tip well. Then duplicated gangsters appear, bullets start flying, and it's up to Esther and her friend Max the Magician to fight Evil by stopping the gang war before it starts killing the wrong people. And if she has time, maybe Esther can actually keep a hot date with her hunky detective friend Lopez, who doesn't believe in magic. Yet. Unplug the phone and settle down for a fast and funny read."
—New York Times bestselling author Mary Jo Putney

Doppelgangster is the exciting second novel of the Esther Diamond series.

"An amusing urban fantasy starring a wonderful heroine surrounded by a horde of eccentrics, one straight cop, and one interfering matchmaking mom. The jocular story line is filled with a fast-paced frenzy from the first magical mugging until the last as Esther proves once again to be a reader's best friend with her misadventures in Manhattan mystical mayhem." —Midwest Book Review

"Dopplegangster is a joy from start to finish, with a sexy hero, a smart heroine (Does Laura Resnick write any other kind?), a fascinating plot, and a troop of supporting characters both lovable and otherwise. It's a wonderful blend of comedy and surprising suspense. If you haven't met Esther Diamond yet, then you're missing out on a lot of fun." —Linda Howard, New York Times Bestselling author