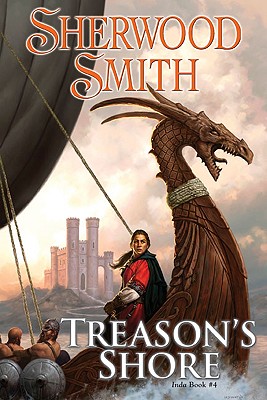 Fourth in "an intense fascinating epic"* of high action and fantasy adventure.
Inda, fresh from his triumph on the battlefield against the Venn, takes his place beside King Evred as Harskialdna, the King's Shield. But the Venn are far from defeated and only Inda's fame is strong enough to inspire all the squabbling kingdoms to unite and raise a force mighty enough to protect the strait and repel the enemy. Evred has also ordered Inda to take over the strait once the battle is won, but Inda, a former pirate, knows that this is a very bad idea. Now Inda must choose between obeying his liege-or committing treason.

Sherwood Smith started making books out of paper towels at age six. In between stories, she studied and traveled in Europe, got a Masters degree in history, and now lives in Southern California with her spouse, two kids, and two dogs. She s worked in jobs ranging from counter work in a smoky harbor bar to the film industry. Writing books is what she loves best. She s the author of the high fantasy "History of Sartorias-deles "series as well as the modern-day fantasy adventures of Kim Murray in "Coronets and Steel." Learn more at www.sherwoodsmith.net."