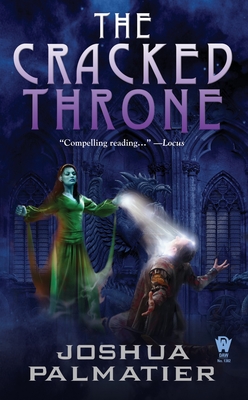 This is book number 2 in the Throne of Amenkor series.

The second book in the gripping and gritty fantasy Throne of Amenkor trilogy, the story of an unlikely heroine in a city devastated and altered by the mysterious White Fire

Varis learned to survive as a very young child in the slums of Amenkor. And when the mysterious White Fire swept through the city for the second time in a millennium, bringing madness, drought, famine, and disease to the land, Varis survived that as well.

But she was changed by the Fire's spell, and she was not the only person marked by the White Fire. Eryn, Mistress of the Skewed Throne, still reigned over the city after the Fire's passing. Yet from that moment, Amenkor began a steady decline, and Eryn herself seemed to hover on the edge of madness.

As Amenkor deteriorated, Varis came to the attention of some of the most powerful people in the city, people who could see her unique potential. And she found herself transformed from gutterscum to unofficial Seeker to bodyguard to assassin. Yet none of her skills could save her from a destiny she never wanted.

Varis became the new Mistress of the Skewed Throne. Untrained, unprepared, not certain who she could trust, Varis took the Throne at the most perilous point in Amenkor's history. The city was on the brink of starvation, and the trading ships sent out to bring back supplies had disappeared without a trace.

And both Varis and Eryn were obsessed with a vision they alone had shared―Amenkor invaded by an unknown enemy, the harbor watchtowers destroyed, wrecked ships sinking in waters stained red with blood, the city itself engulfed in flames....