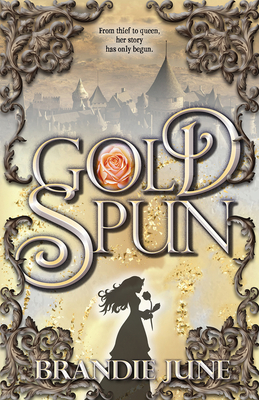 This is book number 1 in the Gold Spun Duology series.

If Nor can’t spin gold, she can always spin lies.

When seventeen-year-old Nor rescues a captured faerie in the woods, he gifts her with a magical golden thread she can use to summon him for a favor. Instead, Nor uses it for a con—to convince villagers to buy straw that can be transformed into gold. Her trick works a little too well, attracting the suspicion of Prince Casper, who hates nobody more than a liar. Intent on punishing Nor, he demands that she spin a room of straw into gold and as her reward, he will marry her. Should she refuse or fail, the consequences will be dire. Desperate for help, Nor summons the faerie’s aid, launching a complicated dance as she must navigate between her growing feelings for both the prince and faerie boy and who she herself wishes to become.

Brandie June spent most of her childhood onstage or reading, as both activities let her live in fantastic stories. She moved to Los Angeles to study acting at UCLA, and eventually branched out into costume design and playwriting. While she spends most of her free time writing, she will still take any excuse to play dress-up, especially if it involves wearing a crown. She happily promotes more stories as a marketing director for kids’ films and anime. When not writing or marketing, she can often be found doing aerial arts, playing board games, drinking too much espresso, and coming up with new art projects. She lives with her husband, two spoiled rescue pups, a spoiled cat, six fish tanks, and five bookshelves. You can find out more about her at www.brandiejune.com and follow her @brandiejune.