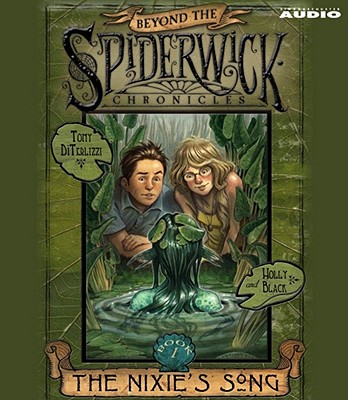 The Spiderwick Chronicles leave the old-fashioned charm of New England far behind and head south for some fiendish faerie fun in the hot Florida sun. Eleven-year-old Nicholas Vargas only thinks his life has been turned upside down after his developer father remarries and moves his new wife and daughter into the soon-to-be completed Mangrove Hollow.

But an "expedition" to a nearby lake turns up a little nixie with a giant problem - the huge, lumbering, fire-breathing variety - and it's up to Nick; his stepsister, Laurie; and his big brother, Julian (plus a familiar face from the original Spiderwick Chronicles) to figure out the best way to stop a host of rampaging giants before all of Florida goes up in smoke.

Tony DiTerlizzi is a #1 New York Times bestselling author and illustrator who has been creating books for twenty years. From fanciful picture books, such as Jimmy Zangwow’s Out-of-This-World Moon-Pie Adventure and The Spider and the Fly (a Caldecott Honor Book), to fantastic middle grade novels like Kenny & the Dragon and the WondLa trilogy, Tony imbues each story with his rich imagination. He created The Spiderwick Chronicles with Holly Black, which has sold millions of copies around the world. You can learn more about Tony at DiTerlizzi.com.