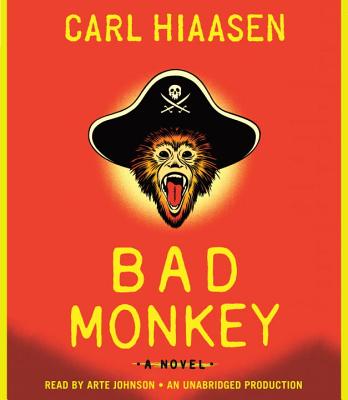 Andrew Yancy—late of the Miami Police and soon-to-be-late of the Monroe County sheriff’s office—has a human arm in his freezer. There’s a logical (Hiaasenian) explanation for that, but not for how and why it parted from its shadowy owner. Yancy thinks the boating-accident/shark-luncheon explanation is full of holes, and if he can prove murder, the sheriff might rescue him from his grisly Health Inspector gig (it’s not called the roach patrol for nothing). But first—this being Hiaasen country—Yancy must negotiate an obstacle course of wildly unpredictable events with a crew of even more wildly unpredictable characters, including his just-ex lover, a hot-blooded fugitive from Kansas; the twitchy widow of the frozen arm; two avariciously optimistic real-estate speculators; the Bahamian voodoo witch known as the Dragon Queen, whose suitors are blinded unto death by her peculiar charms; Yancy’s new true love, a kinky coroner; and the eponymous bad monkey, who with hilarious aplomb earns his place among Carl Hiaasen’s greatest characters.

Here is Hiaasen doing what he does better than anyone else: spinning a tale at once fiercely pointed and wickedly funny in which the greedy, the corrupt, and the degraders of what’s left of pristine Florida—now, of the Bahamas as well—get their comeuppance in mordantly ingenious, diabolically entertaining fashion.

CARL HIAASEN was born and raised in Florida. He is the author of twelve previous novels, including the best-selling Star Island, Nature Girl, Skinny Dip, Sick Puppy, and Lucky You, and four best-selling children's books, Chomp, Hoot, Flush, and Scat. His most recent work of nonfiction is The Downhill Lie: A Hacker's Return to a Ruinous Sport. He also writes a weekly column for The Miami Herald.

“[A] deliciously zany romp. Buckle up for the ride.”
—People

“Bad Monkey boils over with corruption and comeuppance. And yes, there’s a monkey.”
—O, The Oprah Magazine

“[A] rollicking misadventure in the colorful annals of greed and corruption in South Florida. . . . Hiaasen has a peculiar genius for inventing grotesque creatures . . . that spring from the darkest impulses of the id. But he also writes great heroes.”
—Marilyn Stasio, The New York Times

“This ‘Triple-F’—fierce, funny, and Floridian . . . enfolds corruption, greed, mayhem, and very funny social satire in the way that only Hiaasen does it.”
—Reader’s Digest

“No one writes about Florida with a more wicked sense of humor than Hiaasen.”
—Jocelyn McClurg, USA Today

Praise for the work of Carl Hiaasen

“Carl Hiaasen isn’t just Florida’s sharpest satirist—he’s one of the few funny writers left in the whole country . . . I think of him as a national treasure.”
—Malcolm Jones, Newsweek

“Does anyone remember what we did for fun before Hiaasen began turning out his satirical comedies?”
—Alan Cheuse, San Francisco Chronicle

“Hiaasen’s wasteland is as retributive as Cormac McCarthy’s, but funnier. . . .  [His] pacing is impeccable, and the scenes follow one another like Lay’s potato chips.”
—John Leland, The New York Times Book Review

“Carl Hiaasen is a lot like Evelyn Waugh. . . . Both simmer with rage; both are consumed with the same overwhelming vision . . . [both] write the funniest English of this century.”
—Carolyn See, The Washington Post

“Hiaasen [is] in the company of Preston Sturges, Woody Allen, and S. J. Perelman.”
—Janet Maslin, The New York Times

“A big-hearted and deeply funny book . . . All of Carl Hiaasen’s obsessions are on full-tilt boogie.”
—Adam Woog, The Seattle Times

“Hiaasen, like Elmore Leonard, shouldn’t be missed. . . . Hiaasen throws his colorful characters into an increasingly frenetic mix, and the fun lies in watching how, or if, they’ll manage to extricate themselves.”
—David Lazarus, San Francisco Chronicle

“Whenever it seems as if he might be running out of oxen to gore, Hiaasen comes up with fresh victims for his killing wit. [He is] Florida’s most entertainingly indignant social critic . . . Outlandish events soar on the exuberance of Hiaasen’s manic style, a canny blend of lunatic farce and savage satire.”
—Marilyn Stasio, The New York Times Book Review

“A whole lot ‘Survivor,’ a little bit ‘The Tempest,’ with a pinch of Laurel and Hardy . . . Hiaasen is always good for a number of laugh-aloud scenes and lines . . . His ear is pitch-perfect.”
—Alan Michael Parker, Atlanta Journal-Constitution