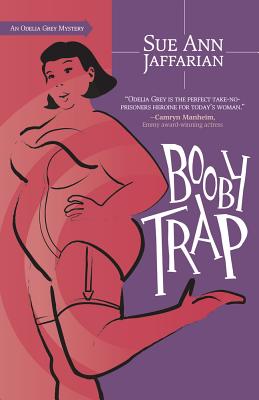 This is book number 4 in the Odelia Grey Mysteries series.

Could Dr. Brian Eddy, plastic surgeon to the rich and famous, possibly be the Blond Bomber serial killer? Odelia would never have suspected the prominent doctor of killing the bevy of buxom blonds if she hadn't heard it directly from her friend Lillian--Dr. Eddy's own mother--over lunch one day.

Newlywed Odelia decides to stick her big nose into the case. But this mystery gets even messier than Odelia's chicken parmigiana sandwich, with everything from homeless kittens to Mob connections. Even with the help of her husband Greg and dog Wainwright, friends Zee and Seth, Detective Dev Frye, and her boss Mike Steele, Odelia discovers just how difficult -- and dangerous--it'll be to bust this killer.

Odelia Grey is everything you want in a heroine...smart, funny, and completely unapologetic.--Tim Maleeny, award-winning author of Stealing the Dragon

An intriguing, well-plotted mystery that will entertain and inspire.--The Strand Magazine

Sue Ann Jaffarian does a masterful job. Once you get to know Odelia Grey, you'll love her. I know I do.--Naomi Hirahara, Edgar Award-winning author of Snakeskin Shamisen