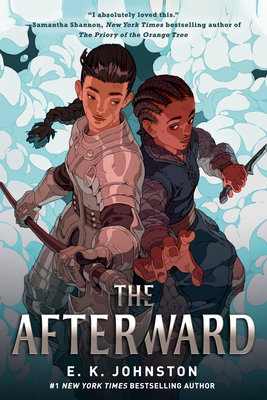 Kalanthe is about to become a knight, but in order to pay for her training, she must marry. Olsa was a thief before the Quest, and she continues to thieve now that it's done, not knowing what else she should fill her time with. Though they shared a deep and powerful bond during their time on the road, they must now decide if the bond will be able to survive in their new, less dangerous lives. And even though the kingdom is peaceful once again, perhaps there are still some things - and some people - worth saving. What happens when the epic Quest is all finished and the valiant heroes who saved the kingdom need to come home and get back to business as usual? In The Afterward, E.K. Johnston weaves a touching love story into the pastoral conclusion of an epic tale with finesse and feeling, bringing us into the relatable complexities and concerns of every day life in a magic-filled kingdom. Pick it up and get swept away!  - Kylie

"I love this book so very much."—Robin LaFevers, New York Times bestselling author of the His Fair Assassin trilogy

Romantic high fantasy from the bestselling author of Star Wars: Ahsoka and Exit, Pursued by a Bear.

It's been a year since the mysterious godsgem cured Cadrium's king and ushered in what promised to be a new golden age. The heroes who brought home the gem are renowned in story and song, but for two fellows on the quest, peace and prosperity don't come easily.

Apprentice Knight Kalanthe Ironheart wasn't meant for heroism so early in life, and while she has no intention of giving up the notoriety she's earned, reputation doesn't pay her bills. Kalanthe may be forced to betray not her kingdom or her friends, but her own heart as she seeks a stable future for herself and those she loves.

Olsa Rhetsdaughter was never meant for heroism at all. Beggar and thief, she lived hand to mouth on the streets until fortune--or fate--pulled her into Kalanthe's orbit. And now she's reluctant to leave it. Even more alarmingly, her fame has made her profession difficult, and a choice between poverty and the noose isn't much of a choice at all.

Both girls think their paths are laid out, but the godsgem isn't quite done with them and that new golden age isn't a sure thing yet.

In a tale both sweepingly epic and intensely personal, Kalanthe and Olsa fight to maintain their newfound independence and to find their way back to each other.

E.K. Johnston is the #1 New York Times bestselling author of several YA novels, including the LA Times Book Prize finalist The Story of Owen and Star Wars: Ahsoka. Her novel A Thousand Nights was shortlisted for the Governor General's Award. The New York Times called The Story of Owen "a clever first step in the career of a novelist who, like her troubadour heroine, has many more songs to sing" and in its review of Exit, Pursued by a Bear, the Globe & Mail called Johnston "the Meryl Streep of YA," with "limitless range." E.K. Johnston lives in Stratford, Ontario. Follow her on Twitter at @ek_johnston

"I love this book so very much. It's an epic quest, with female knights and female camaraderie and companionship. I so love how Kate took all the epic's tropes, then not so much subverted them as she did reinvent them in her own female centric image." —Robin LaFevers, New York Times bestselling author of the His Fair Assassin trilogy

“The Afterward features a band of lady knights, a lovely F/F romance, and a unique look at what happens after the heroes save the world. High fantasy lovers, you’ll love this.”—Julie C. Dao, author of Forest of a Thousand Lanterns

"Absolutely delightful. The Afterward is a queer fantasy that evokes series like The Belgariad and The Mallorean but puts a modern twist on them. I adored everything about this book."—Shaun David Hutchinson, author of We Are the Ants

★"Both the world-building and the LGBTQ romance are well done and appealing.... Delightful."—SLJ, starred

"If there's a Bechdel test for male representation, this book does not pass it."—Rach H., Goodreads.com

"By the time I turned to the last page, I was basking in that warm, tingly glow of having spent worthwhile time with some great new friends."—Forever Young Adult