The Lords of Quarmall (Paperback) 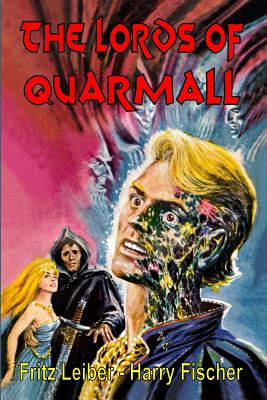 FANTASTIC Editorial, January 1964: Old friends of Fafhrd and the Gray Mouser may be surprised to see a byline on their story in this issue that reads-"By Fritz Leiber and Harry Fischer." "Who," you are saying, "is Harry Fischer? Some Johnny-come-lately trying to horn in on Leiber's master-characters?" Well, hardly. According to Fritz himself, Harry Fischer is the inventor of Fafhrd and the Mouser. And this is indeed a tale in itself, and one with which we shall acquaint you here and now, in the words of Leiber himself: "Harry and I met in 1930 at the University of Chicago, became fast friends, and have been friends ever since. We had in common enthusiasms for fencing, chess, bridge, drama, and fantasy literature. In our correspondence we often extemporized fragments of fantasy. One day I got a letter from Harry inventing two characters. He wrote: 'All do fear the one known as the Gray Mouser. He walks with swag-ger 'mongst the bravos, though he's but the stature of a child. His costume is all of grey. His weapons are called] Cat's Claw and Scalpel . . . Fafhrd was full seven feet of height. His wrist . . . was thick as a hero's ankle . . . . His mouth smiled as he fingered the ponderous hilt of a huge longsword.' " From this beginnning, Fischer and Leiber utilized Fafhrd and the Mouser in their dreams and fantasy fragments. In 1937 Fischer wrote about 10,000 words of a novel to be called The Lords of Quarmall, a subterranean kingdom Leiber had invented as part of the land of Nehwon. But the fragment languished for 25 years. During this time Leiber wrote other sagas of Lankhmar, and Fischer put aside the fantasy world to become a successful businessman. A year ago, however, Leiber visited Fischer and suggested that he (Leiber) finish Quarmall. So Fritz took the original 10,000 words, plotted and wrote over twice as many more, and-lo the result begins on page 1].