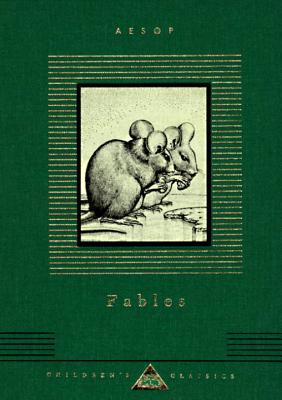 Aesop is said to have lived in the sixth century B.C., a slave on the Greek island of Samos. The eternally entertaining tales attributed to him–in which the fates of sly foxes, wicked wolves, industrious ants, and others, suggest what our own behaviors should (or should not) be–have been universal "best-sellers" since before L'Estrange's definitive 1692 English translation. Gooden's superb engravings were first published in 1936 in a limited edition.

Aesop (6th century BC), is believed to have been a Greek slave on the island of Samos and, according to Herodotus and other classical writers, he was killed by the people of Delphi, who threw him off a rock after he had committed some grave offence against them. Legend has it that he was misshapen, ugly and spoke with a stammer, but his storytelling was famed for its wit, and his ability to teach lessons in morality through story has made his name synonymous with the genre of 'fable'. None of the stories attributed to him existed in written versions until about 300 BC, and the fables have been added through the centuries to the collections appearing under his name, so it is impossible to know how many of the tales in this book were told originally by the man himself – whoever he was!