The Jordan Rules: The Inside Story of One Turbulent Season with Michael Jordan and the Chicago Bulls (Mass Market) 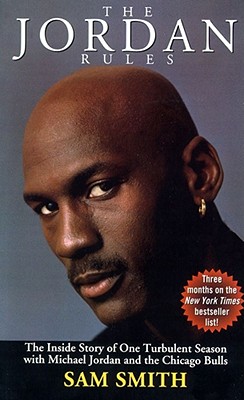 This is the book that changed the way the world viewed Michael Jordan, while delivering nonstop excitement, tension, and thrills.

The Jordan Rules chronicles the season that changed everything for Michael Jordan and the Chicago Bulls. After losing in the playoffs to the “Bad Boys” Detroit Pistons for three consecutive years, the Bulls finally broke through and swept the Pistons in the 1991 Eastern Conference Finals, on the way to their first NBA championship.

Celebrated sportswriter Sam Smith was there for the entire ride. He reveals a candid and provocative picture of Michael Jordan during the season in which his legacy began to be defined, and seeks to figure out what drove him. The Jordan Rules covers everything from his stormy relationships with his coaches and teammates and power struggles with management—including verbal attacks on general manager Jerry Krause and tantrums against coach Phil Jackson—to Jordan’s obsessions with becoming the leading scorer, and his refusal to pass the ball in the crucial minutes of big games. Jordan’s teammates also tell their side of the story, from Scottie Pippen, to Horace Grant, to Bill Cartwright. And Phil Jackson—the former flower child who blossomed into one of the NBA’s top motivators and finally found a way to coax Jordan and the Bulls to their first title—is studied up close.

“Smith takes us into the locker room, aboard the team plane and team bus, and seats us on the bench during games. Sometimes, books reflecting on a team’s success don’t reach the personal level with the people who made it happen: The Jordan Rules does” (Associated Press).

Discover the team behind the man, and the man behind the living legend, in this intense, fascinating inside story of the incomparable Michael Jordan.

Sam Smith has been covering the Chicago Bulls and the NBA for more than four decades. He was a reporter and columnist for the Chicago Tribune for twenty-eight years, and currently writes for the Bulls’ official website. Sam has received the prestigious Curt Gowdy Media Award from the NBA Hall of Fame, and the Professional Basketball Writers Association Lifetime Achievement award. He is the author of the classic bestselling book The Jordan Rules—for which he had unparalleled access to Michael Jordan and the championship 1991-92 Chicago Bulls team—as well as the books Hard Labor, Second Coming, and There is No Next. You can follow him on Twitter @SamSmithHoops.

"The Jordan Rules ... might be the best sports book since Season on the Brink about Bob Knight."
– Chicago Sun-Times

"Jordan boasts a wicked tongue, and not just when it's hanging out as he dunks ... [He] manages to blurt out enough in Smith's book to reveal his own narcis­sistic, trash-talking, obsessively competitive side."
– Newsweek

"The Jordan Rules entertains throughout, but the most fun comes from just hanging out with the players. Smith takes us into the locker room, aboard the team plane and team bus, and seats us on the bench during games. Sometimes, books reflecting on a team's success don't reach the personal level with the people who made it happen: The Jordan Rules does."
– Associated Press

"A riveting account ... what you want in a sports book: the behind-the-scenes stuff, a peek at the private side of the players, their hobbies and politics and religion, the way they get along or don't ... It's fair to compare The Jordan Rules with the campaign books that appear after every presidential race ... The difference is not only that The Jordan Rules explains more persuasively than most of the campaign chronicles how the winner was decided—it's that it does so more interestingly and with more understand­ing of the human heart."
– Fred Barnes, The American Spectator

"Thorough and funny and engaging ... Anecdotes and asides ... give a true flavor of life with a professional sports franchise."
– Philadelphia Inquirer

"Author Sam Smith shows you the other side of Jordan without malice, the side that is not slickly commercialized, or dramatically canonized according to hang time. Smith's book doesn't make Jordan out to be a bad guy or a tyrant. It simply makes him out to be mortal."
– Orlando Sentinel

"In some ways, reading this book made me like Jordan more. Beyond the pull of his puppeteers, he is revealed as being human. He grows and is humbled ... "
– Sports Illustrated

"Revealing and controversial ... Smith takes you through the championship season that, as it turns out, was a truly rocky journey."
– Chattanooga Times

"Taking advantage of daily access to the Bulls, Smith takes the reader beyond the press-conscious statements usually heard through the media .... An excellent documentary on the Bulls' championship season."
– Kansas City Star

"In context, Jordan actually comes off as a sympathetic mortal, which is no easy trick given his supernatural powers and Fort Knox bank account."
– People

"The Jordan Rules tells the story of how a pro basketball team overcomes the handicap of having the greatest individual virtuoso in history as its centerpiece player. Even a Michael Jordan must learn how to pay attention to team dynamics."
– Boston Globe

"You know it's gotta be certifiable, reliable, verifiable, authentic and every other synonym when Bulls GM Jerry Krause labels Smith's work 'mostly fiction.' That's a sure sign the writer has the drop on the situation ... There's nothing more controversial than the truth."
– Peter Yecsey, USA Today