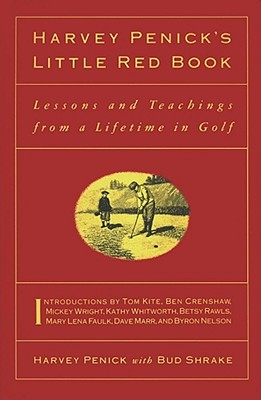 Harvey Penick's life in golf began when he started caddying at the Austin, (Texas), Country Club at age eight. Eighty-one years later he is still there, still dispensing wisdom to pros and beginners alike. His stature in the golf world is reflected in the remarkable array of champions he's worked with, both men and women, including U.S. Open champion and golf's leading money winner Tom Kite, Masters champion Ben Crenshaw, and LPGA Hall of Famers Mickey Wright, Betsy Rawls, and Kathy Whitworth. It is not for nothing that the Teacher of the Year Award given by the Golf Teachers Association is called the Harvey Penick Award.

Now, after sixty years of keeping notes on the things he's seen and learned and on the golfing greats he's taught, Penick is finally letting his Little Red Book (named for the red notebook he's always kept) be seen by the golf world. His simple, direct, practical wisdom pares away all the hypertechnical jargon that's grown up around the golf swing, and lets all golfers, whatever their level, play their best. He avoids negative words; when Tom Kite asked him if he should "choke down" on the club for a particular shot, Harvey told him to "grip down" instead, to keep the word "choke" from entering his mind. He advises golfers to have dinner with people who are good putters; their confidence may rub off, and it's certainly better than listening to bad putters complain. And he shows why, if you've got a bad grip, the last thing you want is a good swing.

Throughout, Penick's love of golf and, more importantly, his love of teaching shine through. He gets as much pleasure from watching a beginner get the ball in the air for the first time as he does when one of his students wins the U.S. Open.

Harvey Penick's Little Red Book is an instant classic, a book to rank with Ben Hogan's Modern Fundamentals of Golf and Tommy Armour's How to Play Your Best Golf All the Time.