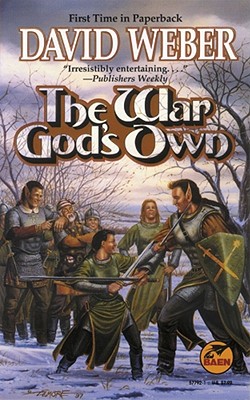 This is book number 2 in the War God (Weber) series.

Bahzell Bahnakson of the Horse Stealer hradani had never wanted to be the champion of the War God. Unfortunately, the War God had insisted. Which was how he had found himself among hostile strangers in the Empire of the Axe - except that that was only the least of his problems. For a start, there was the Order of Tomanak, who were horrified that their deity had chosen a hradani as champion, and were resolved to rectify the matter in a most unpleasant fashion. And if he survived that, he had to get home somehow, in spite of the enemies determined to stop him, to face the Dark God who had sworn to destroy all hradani. But one thing Bahzell had learned: a champion of the War God Tomanak does what needs to be done. And those who got in his way had better watch out...