A Knot of Trolls (Paperback) 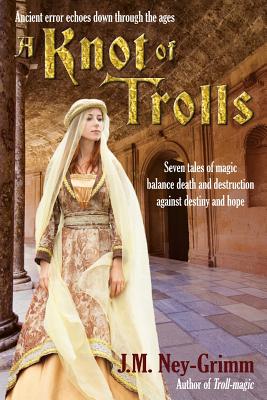 North-lands spellcasters who reach too boldly for power transform into trolls-grotesque villains wielding a potent magic and destined for madness.

Spanning the North-lands history, from ancient times to the pastoral present, A Knot of Trolls features seven such evildoers. Seven trolls and the ordinary youths called by chance or by destiny to take a stand.

"The Troll's Belt" stars motherless Brys Arnsson, challenged as much by his own deceit as by his troll foe. "Crossing the Naiad" presents shepherd girl Kimmer with a dangerous tragedy from the distant past.

"Skies of Navarys" follows two friends with a vehement difference, their contested decision to decide the fate of thousands. In "Resonant Bronze" Paitra and his brother struggle to claim appropriate guilt-neither too much nor too little-and thereby defeat a troll warlord.

"Rainbow's Lodestone" offers the spirit of the rainbow a chance to learn that the smallest places birth freedom. "Star-drake" stalks a pitiless troll-herald to defeat-or is it victory?-utterly unforeseen.

And in "Perilous Chance" young Clary needs a miracle. But her miracle-when it comes-sports razor-sharp talons, world-shaking power, and a troll-witch to guard its sleep.

Seven tales of magic balance death and destruction against destiny and hope.

"It's no secret...that I have favourite writers. J.M. Ney-Grimm is one of them, and with good reason - her writing style is unique, and engrossing." -James J. Parsons, Speaking to the Eyes

"...the world depicted is magical, but the people are very real." -M.A. Dunn, Smashwords

"Her work compares favorably with Robin McKinley and Patricia McKillip...I'm really pleased to have discovered her " -Mira, Amazon

EXCERPT FROM A KNOT OF TROLLS

She was eleven, and she was hurt.

Her leg lay under her, knee throbbing. Her arm ached, the broken bone within sickening in its pain.

But worst of all, worst of all, a vast shadow loomed above her, dark wings spanning distances too great for the grotto enclosing them, razor-sharp talons sparking with the spitting blue fire of a strange power.

How had it come to this? Her day had started so ordinarily, getting breakfast for herself and her sister, because Mama could not. She cast her thoughts desperately back to the morning.

J.M. Ney-Grimm lives with her husband and children in Virginia, just east of the Blue Ridge Mountains. She's learning about permaculture gardening and debunking popular myths about food. The rest of the time she reads Robin McKinley, Diana Wynne Jones, and Lois McMaster Bujold, plays boardgames like Settlers of Catan, rears her twins, and writes stories set in her troll-infested North-lands.