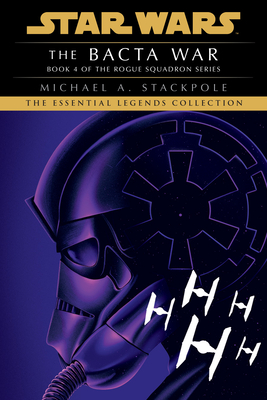 This is book number 4 in the Star Wars: Rogue Squadron- Legends series.

Now for the first time in trade paperback: the fourth book in the epic adventure featuring the fearless pilots of Rogue Squadron.

After her attempt to strike at the heart of Coruscant with a deadly virus, the sinister Ysanne Isard sets her sights on destabilizing the New Republic by seizing its medicinal bacta production. Under the guise of a mere power struggle between corporations on the planet Thyferra, the imperial mastermind has taken control of one of the galaxy's most precious resources.

The heroes of Rogue Squadron are desperate to liberate the planet, and free prisoners trapped by Isard, only to find their plans foiled by the politics of the New Republic, which is set on assigning the squadron elsewhere. With timing and resources running short, Wedge Antilles, Corran Horn, and the other rogues have no choice but to resign from the New Republic.

The team must now go truly rogue to chip away at Isard's power, defeat her powerful complement of Star Destroyers, and free Thyferra from her iron rule. But when she discovers the Squadron's secret base, its pilots must scramble for survival in a winner-take-all battle against Isard's overwhelming and seemingly superior force.