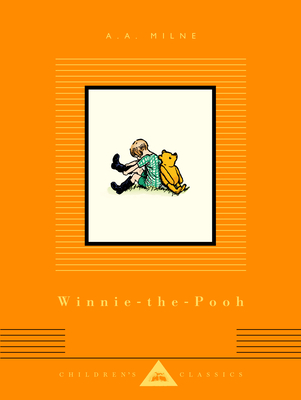 A gorgeous, full-color, hardcover edition of one of the most beloved children's classics in literature

The iconic adventures of Christopher Robin, Winnie-the-Pooh, and their animal friends—Piglet, Kanga and Roo, Owl, Rabbit, Tigger, and Eeyore—have delighted generations of children. In this beautiful edition of the first book that introduced those beloved characters, each of Ernest H. Shepard's classic original illustrations has been meticulously hand painted. Bright in color and elegant in design, this lovely volume of Milne's classic tales welcomes friends old and new into the most enchanted of places, the Hundred Acre Wood.

A. A. MILNE (1882-1956) was born in England. He studied at Cambridge but left school in 1903 to write, soon supporting himself on his earnings as an editor at Punch magazine and as a playwright. His son Christopher Robin Milne was born in 1920. Christopher's toy bear, pig, donkey, tiger, and kangaroo inspired the famous Pooh books. Milne also wrote plays, a novel, his autobiography, and political nonfiction, although he is best remembered for Winnie-the-Pooh, The House at Pooh Corner, When We Were Very Young, and Now We Are Six.