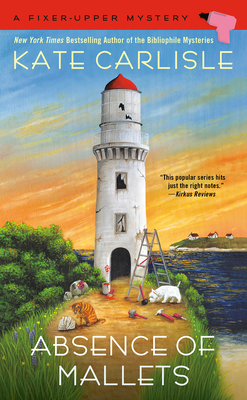 This is book number 9 in the A Fixer-Upper Mystery series.

Contractor Shannon Hammer steels her nerve to pin down a killer in the latest Fixer-Upper Mystery from the New York Times bestselling author of Premeditated Mortar. . . .

Shannon could not be happier that her hunky thriller-writing boyfriend, Mac, has moved in, and it is a good thing they are living together because they are both busier than ever. Mac is hosting writing retreats at his now vacant lighthouse mansion, while Shannon and her crew build Homefront, a quaint Victorian village of tiny homes for veterans in need. Mac’s latest guests are proving to be a handful though, and Shannon has heard some grumbling from the luminaries of Lighthouse Cove about her latest passion project. But nothing can throw a wrench in their plans except a malicious murder.

When one of Shannon’s new friends is found brutally bludgeoned with a mallet near the lighthouse on Mac’s property, the couple hammers out a suspect list and searches for a motive. As they drill deeper for clues, more violence strikes and a new victim winds up in a coma. The pressure is on, and Shannon and Mac will have to move fast to find an unhinged killer dead set on demolishing anyone who gets in their way. . . .