Malorie: The Sequel to the Global Sensation Bird Box (Paperback) 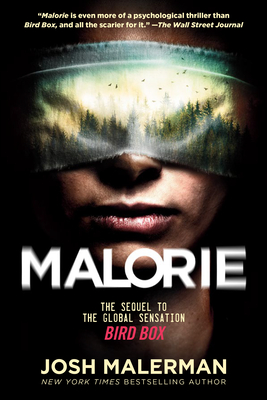 NOMINATED FOR THE BRAM STOKER AWARD • “Malorie is even more of a psychological thriller than Bird Box, and all the scarier for it.”—The Wall Street Journal

Twelve years after Malorie and her children rowed up the river to safety, a blindfold is still the only thing that stands between sanity and madness. One glimpse of the creatures that stalk the world will drive a person to unspeakable violence.

There remains no explanation. No solution.

All Malorie can do is survive—and impart her fierce will to do so on her children. Don’t get lazy, she tells them. Don’t take off your blindfold. AND DON’T LOOK.

But then comes what feels like impossible news. And with it, the first time Malorie has allowed herself to hope.

Someone very dear to her, someone she believed dead, may be alive.

Malorie has already lost so much: her sister, a house full of people who meant everything, and any chance at an ordinary life. But getting her life back means returning to a world full of unknowable horrors—and risking the lives of her children again.

Because the creatures are not the only thing Malorie fears: There are the people who claim to have caught and experimented on the creatures. Murmerings of monstrous inventions and dangerous new ideas. And rumors that the creatures themselves have changed into something even more frightening.

Malorie has a harrowing choice to make: to live by the rules of survival that have served her so well, or to venture into the darkness and reach for hope once more.

Josh Malerman is a New York Times bestselling author and one of two singer/ songwriters for the rock band The High Strung. His debut novel, Bird Box, is the inspiration for the hit Netflix film of the same name. His other novels include Unbury Carol and Inspection. Malerman lives in Michigan with his fiancée, the artist/musician Allison Laakko.

“Malerman’s narrative matches the twists and tension of the first novel, and readers are likely to leave this book sufficiently shaken. The popularity of Bird Box and the ubiquity of the 2018 Netflix adaptation all but guarantee high demand for this outstanding second foray into monsters and madness.”—Booklist (Starred Review)

“Essential worldbuilding is seamlessly interwoven in a narrative paired with enlightening flashbacks into Malorie’s childhood, making this a solid stand-alone. Malerman will no doubt add to his legions of fans with this title ripe for readers of any genre seeking an intensely thrilling ride.”—Library Journal

“You know how you sometimes begin a series on Netflix and you tell yourself ‘I’m just going to watch one episode’ but ten hours later you’ve binged the entire series because the story is so relentlessly compelling? This is the book version of that experience. Not only did I read this book in one sitting, it still haunts me, swirling in my imagination even as I write this.”—Jamie Ford, New York Times bestselling author of Hotel on the Corner of Bitter and Sweet

“Malerman is one of the most intelligent writers of horror fiction working today. His books approach literary fiction, and each feels like an instant classic.”—Bookreporter

“Once Malerman hits the gas you better hang on tight, because he doesn’t let up until the stunning finish.”—Philip Fracassi, author of Behold the Void