Salvatore: The Beginning of The End (Paperback) 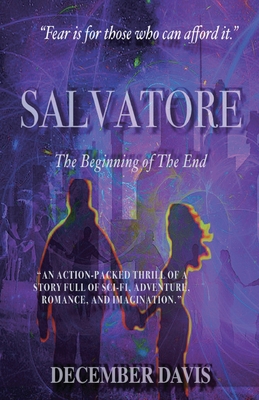 As the chief-contributor's youngest daughter, sixteen-year-old VANNA lived a life of privilege. But the moment her mother comes into her room on the most important night of her life with a terrified expression on her face, Vanna's entire life changes. WILDER has lived the entire eighteen years of his life as an outcast super-soldier. But on the night of The Court, he has a chance to change everything. He will need to use his Super in a way he never has before. TATTY is Vanna's twenty-year-old elder sister. She has been tasked with being a spy and going into the belly of the beast of the powerful Elders of Salvatore. What she learns and what she becomes is more than she bargained for. It has been decided by the Elders of Salvatore to end the human race's existence on the dying Earth. The plan is for a select and elite group of members known as The Court, all above eighteen, to be transported to Ojpan, a newer planet. But a rebellious group of minors and outcasts get wind of the plan and they want to live, they certainly don't want to end the human race. In a frightening race against time, their message of betrayal and survival is spreading around the world. Teens are managing to escape and are doing everything they can to stay alive and avoid getting caught, forming a rebellion that will rival The Elders' plans. In a story full of sci-fi, romance, action, and thrill: Alone, they are powerless, but together, they will prove to be a force to be reckoned with.