Eldritch Tales: A Miscellany of the Macabre (Hardcover) 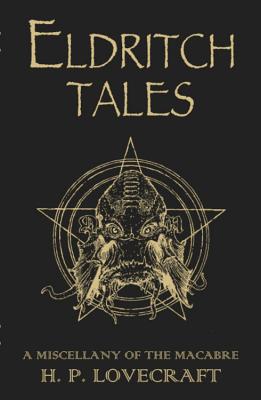 Following the phenomenal success of"Necronomicon," its companion volumebrings together Lovecraft's remaining major stories plus hisweird poetry, a number of obscure revisions, and some notable nonfiction, including the seminal critical essay Supernatural Horror in LiteratureGathering together in chronological orderthe rest of Lovecraft's rarely seen but extraordinary short fiction, this collection includes theentirety of the long-out-of-print collection of 36 sonnets"Fungi from Yoggoth." Howard Phillips Lovecraft died at the age of 47, but in his short life he turned out dozens of stories which changed the face of horror. His extraordinary imagination spawned both the Elder God Cthulhu and his eldritch cohorts, and the strangely compelling town of Innsmouth, all of which feature within these pages. Stephen Jones, one of the world's foremost editors of dark fiction, will complete the Lovecraft story in his extensive afterword, and award-winning artist Les Edwards will provide numerous illustrations for this must-have collection.

H. P. Lovecraft (18901937) has been hailed as one of the most important and influential authors of supernatural fiction of the 20th century. A life-long resident of Providence, Rhode Island, Lovecraft's tales are often set in the fear-haunted towns of an imaginary area of Massachusetts, or in the cosmic vistas that exist beyond space and time. Since his untimely death, he has been acknowledged as an Americanmaster of fantasy fiction, second only to Edgar Allan Poe."

"Lovecraft opened the way for me, as he had done for others before me."  Stephen King

"He's an American original, whose influences on subsequent writers in the field is all-pervasive."  Joyce Carol Oates

"You need to read himhe's where the darkness starts."  Neil Gaiman

"H.P. Lovecraft is not only the essential link between Edgar Allan Poe and the present day, he has become an almost unimaginably influential force throughout the whole of our popular culture."  Peter Straub