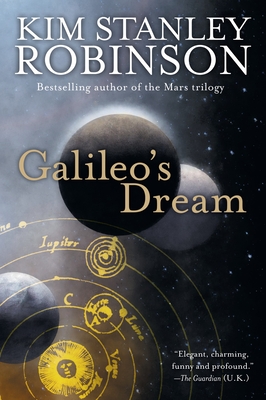 At the heart of a provocative narrative that stretches from Renaissance Italy to the moons of Jupiter is the father of modern science: Galileo Galilei. To the inhabitants of the Jovian moons, Galileo is a revered figure whose actions will influence the subsequent history of the human race. From the summit of their distant future, a charismatic renegade named Ganymede travels to the past to bring Galileo forward in an attempt to alter history and ensure the ascendancy of science over religion. And if that means Galileo must be burned at the stake, so be it. From Galileo’s heresy trial to the politics of far-future Jupiter, Kim Stanley Robinson illuminates the parallels between a distant past and an even more remote future—in the process celebrating the human spirit and calling into question the convenient truths of our own moment in time.

Kim Stanley Robinson is a winner of the Hugo, Nebula, and Locus awards. He is the author of nineteen previous books, including the bestselling Mars trilogy and the critically acclaimed Forty Signs of Rain, Fifty Degrees Below, Sixty Days and Counting, The Years of Rice and Salt, and Antarctica. In 2008 he was named a "Hero of the Environment" by Time magazine, and he recently joined in the Sequoia Parks Foundation's Artists in the Back Country program. He lives in Davis, California.

“Blending epic sf with alternate history, this is a masterwork of storytelling, philosophy, and science.”—Library Journal

“A brilliant work of imagination, drawing together the ‘two cultures’ in a harmonious marriage of science and art.” —The Times (London)

“The historical sections are a triumph, with Robinson’s gifts for characterization and world-building firmly to the fore. . . . The finale is both stirring and melancholic, and a fitting tribute to science’s most famous iconoclast.” —New Scientist

“Riveting . . . Robinson brings [Galileo] to life with both his genius and his faults.”—The Denver Post

“Told with verve and a sense of excitement.”—January Magazine