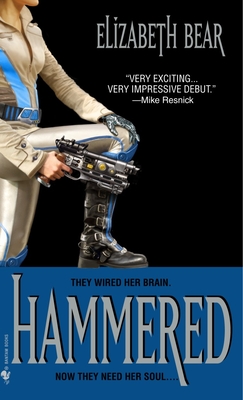 This is book number 1 in the Jenny Casey series.

She was engineered for combat—in a world that is running out of time.

Once Jenny Casey was somebody’s daughter. Once she was somebody’s enemy. Now the former Canadian special forces warrior lives on the hellish streets of Hartford, Connecticut, in the year 2062. Racked with pain, hiding from the government she served, running with a crime lord so she can save a life or two, Jenny is a month shy of fifty, and her artificially reconstructed body has started to unravel. But she is far from forgotten. A government scientist needs the perfect subject for a high-stakes project and has Jenny in his sights.

Suddenly Jenny Casey is a pawn in a furious battle, waged in the corridors of the Internet, on the streets of battered cities, and in the complex wirings of her half-man-made nervous system. And she needs to gain control of the game before a brave new future spins completely out of control.

“A gritty and painstakingly well-informed peek at a future we’d all better hope we don’t get . . . Elizabeth Bear builds her future nightmare tale with style and conviction and a constant return to the twists of the human heart.”—Richard Morgan

Elizabeth Bear was born on the same say as Frodo and Bilbo Baggins, but in a different year. This, coupled with her childhood tendency to read the dictionary for fun, has led inevitably to penury, intransigence, and the writing of speculative fiction. Her hobbies include incompetent archery, practicing guitar, and reading biographies of Elizabethan playmenders.

She is the recipient of the John W. Campbell Award for best New Writer and the author of over a dozen published or forthcoming novels, including the Locus Award-winning Jenny Casey trilogy and the Phillip K. Dick Award-nominated Carnival. A native New Englander, she spent seven years near Las Vegas, but now lives in Connecticut with a presumptuous cat.

“A gritty and painstakingly well-informed peek at a future we’d all better hope we don’t get . . . Elizabeth Bear builds her future nightmare tale with style and conviction and a constant return to the twists of the human heart.”—Richard Morgan