Fifty Degrees Below (Science in the Capital #2) (Mass Market) 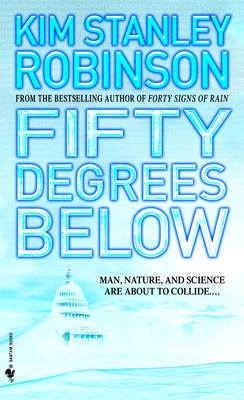 Set in our nation’s capital, here is a chillingly realistic tale of people caught in the collision of science, technology, and the consequences of global warming.

When the storm got bad, Frank Vanderwal was in his office at the National Science Foundation. When it was over, large chunks of San Diego had eroded into the sea, and D.C. was underwater. Everything Frank and his colleagues feared had culminated in this disaster. And now the world was looking to them to fix it.

But even as D.C. bails itself out, a more extreme climate change looms. The melting polar ice caps are shutting down the warm Gulf Stream waters—meaning Ice Age conditions could return. And the last time that happened, eleven thousand years ago, it took just three years to start.…

KIM STANLEY ROBINSON is a winner of the Hugo, Nebula, and Locus Awards. He is the author of ten previous books, including the bestselling Mars trilogy and the critically acclaimed Forty Signs of Rain, The Years of Rice and Salt, and Antarctica–for which he was sent to the Antarctic by the U.S. National Science Foundation as part of their Antarctic Artists and Writers' Program. He lives in Davis, California.

"Fifty Degrees Below should be required reading for anyone concerned about our world's future.... it provides perhaps the most realistic portrayal ever created of the environmental changes that are already occurring on our planet."—Publishers Weekly, starred review

"Could give Michael Crichton a run for his money.... should be required reading for government officials and voters."—St. Louis Post-Dispatch