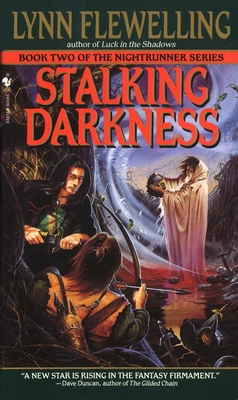 This is book number 2 in the Nightrunner series.

With the Leran threat laid to rest, Alec and Seregil are now able to turn their attention to the ancient evil which threatens their land. The Plenimarans, at war with Skalans, have decided to defeat their ancient enemy by raising up the Dead God, Seriamaius. The early attempts at this reincarnation--masterminded by the sinister Duke Mardus and his sorcerous minion Vargul Ashnazai--once left Seregil in a sorcerous coma. Now, an ancient prophecy points to his continuing role in the quest to stop Mardus in his dread purpose.

Seregil's friend and Mentor, the wizard Nysander, has long been the guardian of a deadly secret. In a secret, silver-lined room hidden well beneath the Oreska, he has served for most of his 300 years as the keeper of a nondescript clay cup. But this cup, combined with a crystal crown and some wooden disks, forms the Helm of Seriamaius, and any mortal donning the reconstructed Helm will become the incarnation of the god on earth.

Nysander holds the cup and Mardus the wooden disks--one of which was responsible for Seregil's coma--but the crown must still be located. Threatened under pain of death by Nysander to keep his quest a secret even from his loyal companion, Alec, Seregil is dispatched to find the last missing piece of the Helm so that he and Nysander can destroy it. But this is only the beginning of one of his deadliest journeys ever, for the prophecy also holds that four will come together in a time of darkness, and gradually all that Seregil values is placed at risk as he, Alec, Nysander and Micum are drawn into a deadly web of terror and intrigue.

Lynn Flewelling is best known for her Nightrunner series, as well as The Tamír Triad, and her work appears in a dozen languages. She also maintains a lively online presence with her website and her LiveJournal, Talk in the Shadows, and her Facebook page. Born in northern Maine, Flewelling is happily transplanted in Redlands, California, with her husband and some very spoiled dogs.