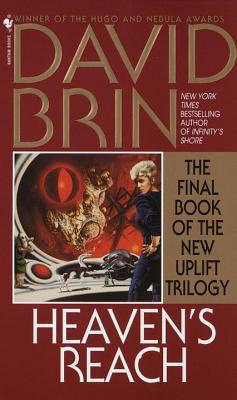 This is book number 3 in the New Uplift Trilogy series.

Winner of the Nebula and Hugo Awards, David Brin brings his bestselling Uplift series to a magnificent conclusion with his most imaginative and powerful novel to date--the shattering epic of a universe poised on the brink of revelation...or annihilation.

The brutal enemy that has relentlessly pursued them for centuries has arrived. Now the fugitive settlers of Jijo--both human and alien--brace for a final confrontation. The Jijoans' only hope is the Earthship Streaker, crewed by uplifted dolphins and commanded by an untested human.

Yet more than just the fate of Jijo hangs in the balance. For Streaker carries a cargo of ancient artifacts that may unlock the secret of those who first brought intelligent life to the Galaxies. Many believe a dire prophecy has come to pass: an age of terrifying changes that could end Galactic civilization.

As dozens of white dwarf stars stand ready to explode, the survival of sentient life in the universe rests on the most improbable dream of all--that age-old antagonists of different races can at last recognize the unity of all consciousness.

David Brin is the author of ten previous novels, Sundiver, The Uplift War, Startide Rising, The Practice Effect, The Postman, Heart of the Comet (with Gregory Benford), Earth, Glory Season, Brightness Reef, and Infinity's Shore, as well as the short-story collections The River of Time and Otherness.  He has a doctorate in astrophysics and has been a NASA consultant and a physics professor.  He lives in southern California, where he is at work on his next novel.

"Brin, as usual, provides loads of action as he presents a galactic panorama to view and intellectual speculation to challenge the reader."
--Sunday Life