The Uncommoners #2: The Shadows of Doom (Library Binding) 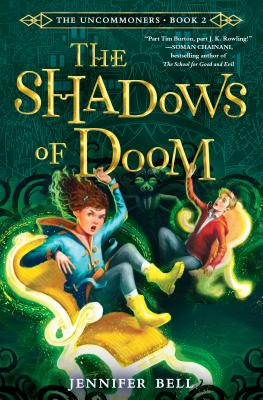 This is book number 2 in the The Uncommoners series.

Anyone with a Hogwarts-shaped hole in their lives can't miss the second book in this fantasy series. Escape to Lundinor, the underground city that holds the world's greatest treasures . . . and its biggest threats.

Ivy and her older brother, Seb, are back in Lundinor--the underground city where enchanted objects can do incredible things, if they're uncommon. But not everyone is thrilled at their arrival. Namely, Selena Grimes, the wicked ghoul who will stop at nothing to return her guild, the Dirge, to their former glory. When Ivy and Seb learn that Selena is after the Jar of Shadows, one of the five most powerful uncommon objects, they know it's up to them to find it first.

But there's more than just Selena to worry about this trading season. Jack-in-the-Green, an escaped shape-shifting convict, haunts the city; Grivens, a troubling game where players often end up horribly injured--or worse--is on the rise; and foes disguised as friends lurk in the shadows. Ivy will have to figure out who they can trust--before they meet their uncommon ends.

Jennifer Bell's The Uncommoners #1: The Hands of Fate debuted as a Kids' Indie Next Pick and a Children's Book Council "Hot Off the Press" selection. It was also named one of the Publishers Association's Best New Children's Books and hit the #5 spot on the Sunday Times children's bestseller list in the UK. Lundinor's spring transformation in The Smoking Hourglass was inspired by traditional English villages and the world-famous Glastonbury music festival.

When not thinking about what uncommon tape measures might do, Bell can be found talking about her other favorite stories as a bookseller at an award-winning children's bookshop in London. You can find her online at jennifer-bell-author.com, on Facebook, and on Twitter at @jenrosebell.

Praise for the Uncommoners series:

“It’s impossible not to hear the chimes of Harry Potter ringing through.” —The Telegraph

“A return visit would be worth it.” —The Bulletin