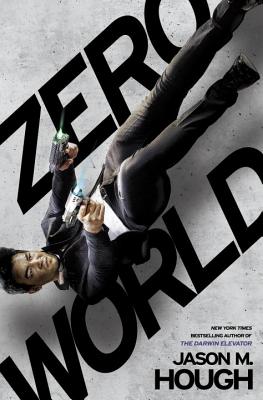 Published in rapid succession, Jason M. Hough's first three novels, The Darwin Elevator, The Exodus Towers, and The Plague Forge, earned mountains of praise and comparisons to such authors as James S. A. Corey and John Scalzi. Now Hough returns with a riveting near-future spy thriller that combines the adrenaline of a high-octane James Bond adventure with mind-blowing sci-fi speculations worthy of Christopher Nolan's Inception.
Technologically enhanced superspy Peter Caswell has been dispatched on a top-secret assignment unlike any he's ever faced. A spaceship that vanished years ago has been found, along with the bodies of its murdered crew save one. Peter's mission is to find the missing crew member, who fled through what appears to be a tear in the fabric of space. Beyond this mysterious doorway lies an even more confounding reality: a world that seems to be Earth's twin.
Peter discovers that this mirrored world is indeed different from his home, and far more dangerous. Cut off from all support, and with only days to complete his operation, Peter must track his quarry alone on an alien world. But he's unprepared for what awaits on the planet's surface, where his skills will be put to the ultimate test and everything he knows about the universe will be challenged in ways he never could have imagined.
Includes the complete bonus novella The Dire Earth, a prequel to the bestselling sci-fi adventure The Darwin Elevator.
Praise for Zero World
This is sci-fi writing at its best. I couldn t put the book down. Felicia Day, author of You re Never Weird on the Internet (Almost)
An enjoyable read . . . Expect minor whiplash from the frenetic pace. Entertainment Weekly
A] science fiction novel that] smashes The Bourne Identity together with The End of Eternity to create a thrilling action rampage that confirms Hough as an important new voice in genre fiction. Publishers Weekly (starred review)
No one has created a multiverse like Jason Hough does in Zero World. Imagine Eternal Sunshine of the Spotless Mind meets James Bond. New York Journal of Books
A fast-paced cinematic novel full of action . . . Story, character, world building, action all points are firing on all cylinders here. Bookreporter
Hough has combined all the ingredients of a first-rate sci-fi thriller. Kirkus Reviews
One hell of an entertaining read. Hough continues to deliver white-knuckle books anchored by unusual and fascinating characters. Zero World is a giant cup of pure badassery that secures his place among the finest sci-fi action writers today. Kevin Hearne, New York Times bestselling author of the Iron Druid Chronicles
A high-octane blend of science fiction and mystery, Zero Worldis a thrill ride that shoots you out of a cannon and doesn t let up until the very last page. Wesley Chu, author of Time Salvager
Warning: Do not pick up this book if there is anything else you need to do. Brian Staveley, author of the Emperor's Blades series
I just finished Zero World and there's only one thing I need to know: How long must I wait for the sequel ? Raymond Benson, former James Bond novelist and author of the Black Stiletto series

Jason M. Hough is the New York Times bestselling author of the Dire Earth Cycle: The Darwin Elevator, The Exodus Towers, and The Plague Forge, as well as the novella The Dire Earth. Hough was born in Illinois but grew up on the mean streets of suburban San Diego, California. In 1978, when he was six, his parents took him to see Star Wars, and so began a lifelong love of sci-fi and all things geek. He later worked for a decade in the videogame industry as a 3D artist and game designer. Today he lives in Seattle with his wife and two young sons. When not writing, Hough enjoys building LEGO spaceships with his boys and other similarly grown-up pursuits.