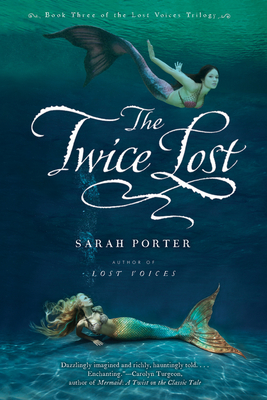 This is book number 3 in the The Lost Voices Trilogy series.

"Nail-biting suspense, magically-written characters and plot twists that no one sees coming . . . you'll devour every minute of it."—Teenreads.com

Mermaids have been sinking ships and drowning humans for centuries, and now the government wants to exterminate them. Luce, a mermaid with exceptionally threatening abilities, becomes their number-one target. She takes refuge in San Francisco, where she finds hundreds of mermaids living in exile under the docks of the bay. These are the Twice Lost: once-human girls lost first when a trauma turned them into mermaids, and lost a second time when they broke mermaid law and were rejected by their tribes. Luce is stunned when they elect her as their leader. But she won't be their queen. She'll be their general. And they will become the Twice Lost Army—because this is war.

Sarah Porter is the author of the young adult novels Lost Voices, Waking Storms, The Twice Lost, and Vassa in the Night. She is also an artist and a freelance public school teacher. Sarah and her husband live in Brooklyn, New York. Visit her online at www.sarahporterbooks.com.

PRAISE FOR THE TWICE LOST"Sara Porter creates a world where the happy-go-lucky mermaid stories mean nothing. . . . [Her] eye-opening take on undersea folklore is enough in itself to make this trilogy the piece of art that it is. Throw in nail-biting suspense, magically-written characters and plot twists that no one sees coming, and you are left with a series that pulls you under its spell and breaks your heart. . . and you’ll devour every minute of it."—teenreads.com"The Twice Lost offers a moving, action-packed and deeply satisfying ending to Sarah Porter's brilliant Lost Voices trilogy. What a beautiful, intense world of ferocious lost girls who find themselves at last. I loved it."—Carolyn Turgeon, author of Mermaid and The Fairest of Them All PRAISE FOR LOST VOICES"[A] haunting debut. . . . Porter’s writing is expressive and graceful. . . . a captivatingly different story."—Booklist

"A beautifully written and heartbreaking story about a lost soul struggling to forgive the people she loved who wronged her, and ultimately to forgive herself."—Jennifer Echols, author of Going Too Far  PRAISE FOR WAKING STORMS"Sarah Porter’s mermaid world is dazzlingly imagined and richly, hauntingly told. Waking Storms is as enchanting—and dark, and lush, and tragic, and gorgeous—as the mermaids' song."—Carolyn Turgeon, author of Mermaid: A Twist on the Classic Tale"Porter has crafted another winner. . . . Like any good middle novel in a trilogy, Waking Storms leaves plenty of strings untied to keep you hungry for the final installment. But unlike many weaker series, this book also stands up completely on its own two feet (fins?) and is as deep, dark and magical as Lost Voices. A reader could pick it up not having read the previous title and be fine, while fans of the first novel surely will not be disappointed."—teenreads.com