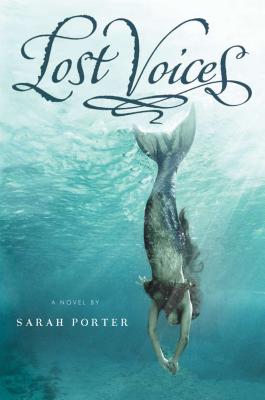 This is book number 1 in the The Lost Voices Trilogy series.

Fourteen-year-old Luce has had a tough life, but she reaches the depths of despair when she is assaulted and left on the cliffs outside of a grim, gray Alaskan fishing village. She expects to die when she tumbles into the icy waves below, but instead undergoes an astonishing transformation and becomes a mermaid. A tribe of mermaids finds Luce and welcomes her in—all of them, like her, lost girls who surrendered their humanity in the darkest moments of their lives. Luce is thrilled with her new life until she discovers the catch: the mermaids feel an uncontrollable desire to drown seafarers, using their enchanted voices to lure ships into the rocks. Luce possesses an extraordinary singing talent, which makes her important to the tribe—she may even have a shot at becoming their queen. However her struggle to retain her humanity puts her at odds with her new friends. Will Luce be pressured into committing mass murder?
The first book in a trilogy, Lost Voices is a captivating and wildly original tale about finding a voice, the healing power of friendship, and the strength it takes to forgive.

Sarah Porter is the author of the young adult novels Lost Voices, Waking Storms, The Twice Lost, and Vassa in the Night. She is also an artist and a freelance public school teacher. Sarah and her husband live in Brooklyn, New York. Visit her online at www.sarahporterbooks.com.

"A beautifully written and heartbreaking story about a lost soul struggling to forgive the people she loved who wronged her, and ultimately to forgive herself."
—Jennifer Echols, author of Going Too Far

"It might be shelved as a fantasy, but Lost Voices is full of gripping, harsh realism. Without resorting to stereotypes or tired high school plots, it deals with the complications of friendship and peer pressure. And at its core, it's nothing more than a really believable, understandable and relatable story about finding one's voice. Its relevance to real life and its references to the real issues that create lost girls --- abuse, neglect, rape, bad parenting and more--make it a one-of-a-kind mermaid story. For that reason, it will appeal to paranormal, fantasy and realism fans alike."
—teenreads.com

"This is a dark and compelling take on a world usually depicted as more lighthearted. . . . Porter nonetheless carefully doles out enough possibilities to keep the overall tone hopeful, and given the already numerous perky mermaids, these gritty, wounded souls are a creative and welcome addition to the field."
—Bulletin

"The beautifully crafted first book of the Lost Voices trilogy is told in such a rich, despairing aqua tinged tone, it leaves you desperate for more."
—Fantasy Book Review